Tiger Woods practices at Augusta National ahead of the Masters, fueling speculation 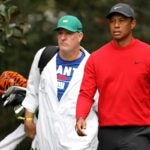 Tiger Woods at the 2020 Masters, walking alongside his caddie Joe LaCava.

What started as hopeful rumors among the most ardent supporters of Tiger Woods became a reality Tuesday as Woods set foot on Augusta National.

According to reports from Sports Illustrated’s Bob Harig, Woods is playing the course Tuesday alongside his son, Charlie, and world No. 7 Justin Thomas.

There has been much speculation about whether Woods will play in the 2022 Masters, which begins next week, and that is sure to continue in frenzied fashion now that he has taken a scouting trip. Woods has made similar trips in the lead-ups to past Masters, fueling the discussion that he’s seriously considering competing for the first time on the PGA Tour since his car accident 13 months ago.

Woods was sidelined following a crash in Los Angeles on Feb. 21, 2021, sustaining injuries so severe that amputation of his right leg was being considered in the days and hours that followed. He spent the following months recovering and largely laying in bed, immobile.

But as Woods detailed in a late-November interview with Golf Digest, he slowly but surely made progress toward walking again, and even hitting golf balls. Woods used his week as a host at the Hero World Challenge to hit balls on the range. From afar, he was seen hitting 3-woods and drivers with full swings.

A week later, he played the PNC Championship, a Champions tour event, where he rode in a cart with Charlie, competing against other families. Woods said that week that while he was able to swing just fine, he was nowhere near being able to physically walk for four straight rounds, let alone any practice rounds.

Expectations for his return were kept purposefully low, even by Woods himself, as he hosted another PGA Tour event at the Genesis Invitational in Los Angeles, the same event he hosted one day before his wreck. The closest he came to playing a month ago was working the 1st tee as a starter at Riviera, announcing sponsor’s exemption Aaron Beverly.

Fast-forward five weeks and Woods is now testing the course of the first major championship of the year, where he has won five green jackets. The excitement for many of his biggest fans is now completely understandable. But it still doesn’t mean he’s fit to play four straight days of tournament golf.

Woods will surely continue testing his body, and that may even extend into next week’s practice rounds. For now, his Augusta appearance is evidence that he’s considering it, which confirms why his name is still listed in the field on Masters.com.

Many news organizations inferred from that site that Woods would potentially play because there is also a list of non-competing past champions that does not include Woods’ name.

Woods’ camp has been typically mum on health updates, but he was seen walking without a leg sleeve for the first time in public at his World Golf Hall of Fame just three weeks ago.

Speculation about Woods’ Masters prep initially reached a peak Tuesday morning when reports about his private jet were confirmed that it was traveling from West Palm Beach northbound to Augusta. Though that has been faulty speculation in the past, sure enough, video footage surfaced of Woods’ plane on the tarmac.

What do you do with all of this information? You wait. You follow Woods’ whereabouts on Twitter. Maybe set up an alert for his announcement. Or stay tuned to Masters coverage on GOLF.com. We’ll have an answer soon enough.