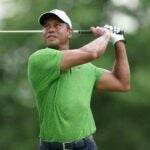 On a difficult day at Southern Hills, Tiger Woods proved yet again why he’s one of the game’s gutsiest players with a second-round score of one-under 69 on Friday — enough to make the cut by a shot.

Given what Tiger has been through with regard to his long list of injuries — and the hole he dug for himself with his first-round score of four-over 74 — it was easy to feel less than bullish about Woods’ chances of snagging a weekend tee time on Friday, especially as the conditions took a turn for the worse, with gusting winds giving players fits.

But Woods has gained a reputation as a player with zero quit, and right away, he demonstrated a remedy to a problem that plagued him during Thursday’s first round, by saving par on the second hole with a nifty up-and-down from the bunker.

Woods posted his first birdie of the day on the 660-yard par-5 5th, knocking his 108-yard approach to five feet and draining the putt. He went long on the 224-yard par-3 8th, and failed to get that one up and down, bringing him back to even on the day. A par on the 9th left him at four over overall through 27 holes.

Woods birdied the 10th for the second day in a row, this time by sinking a 10-footer to get to three over overall, but suffered a disastrous double on the 178-yard par-3 11th when he missed the green long and left. His recovery shot found the bunker, and he failed to get it up and down from there.

At that point, Woods was five over overall, and on the wrong side of the projected cut. But Woods is never one to go quietly.

Though his approach found the greenside bunker on No. 12, he grinded out an up and down, draining a 14-footer to save par.

Woods then stuffed a 112-yard approach to eight feet on the par-5 13th. He drained the putt for birdie, bringing him back to even on the day, four over overall — back inside the cutline. Straightforward pars on 14 and 15 followed, then another tidy birdie on 16, which featured an impressive 203-yard approach that Woods hit to about four feet.

On 17, Woods sank a clutch six-footer to save par, and closed out his second round with a regulation, tap-in par on the 471-yard par-4 18th to post a round of 69, bringing him to three over through 36 holes. Players at four over also got into the weekend, but those at five over or worse were sent packing.

Woods is currently 12 shots behind Will Zalatoris’ lead of nine under par — a likely insurmountable tally. But for now, Tiger Woods will play the weekend.