Stories of 2021: Bryson vs. Brooks: Brooksies, beers and … secret admirers? 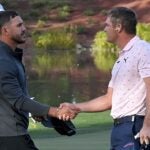 Brooks Koepka, left, and Bryson DeChambeau after Koepka's November victory in the Match.

Brooks Koepka was riding in his cart, when, unprompted, he went in a completely different direction. This wasn’t a “forced” hug. It most certainly wasn’t another jab. It was praise, after a summer of anything but.

“He hammers the ball. Holy cow,” Koepka said. “Watching him hit buckets like — to be honest, most of the times we’re hitting, we’re on different ends of the range or whatever, and we don’t play together; we’re at opposite tee times most of the time, so I never actually get to watch it. But it’s pretty impressive.

“That ball goes, I mean — I’ve never seen anything like it.”

Koepka had convincingly won the “Match” late last month over his personal antagonist for nearly the past three years, but also now just lost the long drive portion of it to him and was heading to another side contest. And after watching Bryson DeChambeau pump a drive over 400 yards into the Las Vegas dusk, Koepka was striking a different tone: complimentary.

The bouquets continued before the TNT broadcast signed off.

“I know it’s not the result you wanted, but Brooks was really impressed with you, watching you up close and personal for the first time with driver in hand,” broadcaster Amanda Balionis said to DeChambeau. “Are you at least a little happy with the respect that you seemed to earn today?”

“Yeah, I hope so,” DeChambeau said. “I mean, look, I’m just going to be playing my game no matter what. And I’ve always had a respect for Brooks because of his four major championships and what he’s done for the game, and, at the end of the day, it was 12 holes and he got me. So hopefully there’ll be a rematch sometime soon.”

And Brooks, your thoughts?

“You know, obviously watching him up close and personal, it’s pretty neat, it’s pretty special to watch him hit the ball,” Koepka said. “Like I said, there is respect there.

“But at the same time, it was fun to come out here and settle this. And enough said.”

OK, so it’s not exactly as if this spat will enter 2022 with Koepka in DeChambeau’s next YouTube swing-thoughts video. But, after “the eye roll,” after Brooksies and beers, after digs at drivers and caddies, after “the hug,” the brouhaha exits 2021 admirably. Somewhat so, at least. And you would have had to stretch your imagination about as long as one of those 400-yard drives to have seen that one coming earlier this year.

In this lookback at the top stories of the year, let’s review Bryson v. Brooks a little differently. Yes, we’ll still look back on it all. But we’ll also answer the question of why it captures our fancy oh so much. And then try to predict what’s next.

What happened this year between Bryson DeChambeau and Brooks Koepka?

Our Jessica Marksbury has done a wonderful job this year of noting all that has been Brooks vs. Bryson, so what I’ll try to do here is rate the 2021 dust-ups on a very unscientific scale — eagle means it was an eye-opener; birdie means you took the time to read about it; par means you heard someone say something about it; bogey means meh; and out of bounds means things went too far. Here goes.

The “eye roll:” This squabble appears to have started in 2019 over a Koepka complaint over DeChambeau’s pace of play, continued with a back-and-forth over Koepka’s abs after a photo shoot, then was more or less over. Until it wasn’t. A day after the PGA Championship in May, a previously unseen Golf Channel interview made its way to social media, where countless viewers watched Koepka roll his eyes after DeChambeau walked past during the second round, then heard a couple colorful thoughts. Our Dylan Dethier also dug deep to find out how the video was released. Score: Eagle. It was as mesmerizing as it was mysterious.

Brooksies and beers: From there, another video surfaced that showed a fan heckling DeChambeau at the PGA with a shout of “Brooksie,” to which DeChambeau told the man “to get out of here.” It caught fire. At the Memorial, our James Colgan reported that numerous fans were escorted away from Muirfield Village after also shouting the ‘B’ word — to which Koepka told those fans over Twitter that anyone who had gotten the boot that day would be in line for free beer. Score: Out of bounds. There’s nothing wrong with a fan poking a pro. But if another pro inflames it, that’s too far. It would eventually lead to another confrontation and the PGA Tour stepping in.

Caddie dig: This summer, DeChambeau also split with longtime caddie Tim Tucker. And Koepka was all over it, when he tweeted: “Couldn’t do it without my guy Rick! Best friend and greatest caddie to do it  @RickyElliott appreciation day!” Score: Birdie. It was creative.

Driver dig: At the Open Championship, DeChambeau complained of trouble with his driver. And Koepka pounced again, when, in another Golf Channel interview, he said: “Drove the ball great. Love my driver.” Score: Bogey. Too repetitive.

Confrontation: At the BMW Championship, after a loss in a dramatic six-hole playoff, DeChambeau confronted a fan who had said to him: “Good job, Brooksie,” ESPN reported. A few weeks later, PGA Tour commissioner Jay Monahan announced that anyone yelling “Brooksie” — or exhibiting any behavior that didn’t align with the Tour’s code of conduct for fans — would be subject to dismissal from tournament grounds. Score: Out of bounds. Again.

Ryder Cup: While golf is an individual sport — and you’re free to like or dislike anyone you so choose — it occasionally is a team event, and the bad blood made for potential uneasiness for U.S. Ryder Cup captain Steve Stricker when DeChambeau and Koepka automatically qualified for the team. But in the end, the Americans won, the two even told Stricker they would play together if asked and, in another viral moment, after encouragement from teammates, they hugged at the winner’s press conference, though both later admitted it was “forced.” Score: Birdie. Though noteworthy, the U.S. win was bigger than this.

The Match: A few weeks later, it was announced that DeChambeau and Koepka would play in the fifth edition of the Match, on the day after Thanksgiving, at the Wynn Golf Club in Las Vegas. Koepka won 5 and 3 in the 12-hole event. Score: Par. The Match was again fun. But more because of announcers Phil Mickelson and Charles Barkley.

Why do we care about Bryson DeChambeau vs. Brooks Koepka?

Good question. So I asked two of our GOLF.com staffers and answered it myself, too.

Nick Piastowski: It’s the car crash theory, right? Something out of the ordinary just makes you want to slow down and check the damage, even though there’s really no reason to, and it actually does more harm than good. Same thing here. Golf, for the most part, is a friendly pastime, but Brooks-Bryson makes you rubberneck, whether you like it or not.

James Colgan: We care about Brooks and Bryson for the same reason we care about every unnecessary and wholly over-the-top sports drama: It’s entertainment. It breaks up the monotony of the week-in, week-out grind of the PGA Tour and gives us a reason to watch and care about golf’s biggest names beyond them being golf’s biggest names. Bryson/Brooks, for all its recent phoniness, was arguably golf’s most broadly understood story of 2021. People who weren’t fans of golf — even those who were barely golfers themselves — had an opinion about what transpired. Sure, it ended on the hokeyest possible note, but that doesn’t diminish the value of the entertainment that came before it. Maybe we don’t care as much anymore, but we should be glad we did. For a sport constantly whining about overly-sanitized stars, it feels fairly hypocritical to criticize something that was legitimately fun, however fleeting.

Josh Berhow: We care because golf needs more rivalries, which in turn makes TV better and the entire product more entertaining. However, there are levels to this. While I don’t think they care for each other too much, the recent stages of their “feud” came off as more of a marketing ploy — which eventually led to their match in Vegas. That was cute and all, but it was hardly major-championship pressure. It’s something to keep an eye on, though, because if we ever get lucky enough to see these two in the final pairing on Sunday of a major, the pleasantries will go out the window and THAT will be must-watch TV.

What’s next between Bryson DeChambeau and Brooks Koepka?

Your guess is as good as anyone’s, but here’s a thought: It’ll be nothing until it’s something. Imagine what happens when DeChambeau and Koepka play in an actual event. We almost had it at the Hero World Challenge at the start of the month — and Koepka was, again, all over it.

Reporter: “And have you noticed by any chance that there could be part two of last week’s spanking of Bryson since you guys are right there, in one and two? Given any thought to that now?”

Koepka: “No, I don’t give any thought to it because there should be no part two. I mean, I won the online battle, he can’t trash talk, and I’ve won the golf. So 2-0 — it’s tough to come back from.”