Taunts of ‘Brooksy!’ at Bryson DeChambeau lead to fan ejections at the Memorial 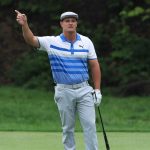 DUBLIN, Ohio — At least three spectators were ejected from the Memorial Tournament for taunting Bryson DeChambeau during Friday’s second round, specifically for yelling “Brooks Koepka!” at DeChambeau. It was the latest fuel added to the fire of a rivalry between DeChambeau and Koepka, two of the game’s biggest stars.

The first instance happened on the 2nd hole at Muirfield Village, when a 30s-something wearing a blue polo, shorts and square-rimmed sunglasses screamed “Brooksy!” as DeChambeau hit his approach shot into the green.

The spectator and his two companions, however, told police officers that they actually thought it was Koepka, who isn’t in the field this week.

In a little less than an hour, two additional fans taunted DeChambeau by yelling Koepka’s name, and both were immediately ejected. In all three scenarios (on holes No. 2, 4 and 5), a Dublin police officer or tournament security official darted under the ropes and into the crowd to apprehend the suspected squawker. On each ejection, a Dublin police officer informed the offending fans that their removal was constituted by their yell. (All of the observed ejections Friday came after DeChambeau had struck his ball.)

Friday’s incident comes two weeks after the PGA Championship, in which a video surfaced of a fan calling DeChambeau “Brooksy” at the Ocean Course. Koepka later responded with that same video in a Twitter spat with DeChambeau last week.

After the round, DeChambeau told reporters the taunts left him chuffed, and that he did not order anyone’s removal.

“Oh, they weren’t taunts at all, it was flattering. I think it’s absolutely flattering what they’re doing,” DeChambeau said, after his second-round 72. He’s seven behind the co-leaders. “They can keep calling me that all day if they want to, I’ve got no issue with it. When you look at it, there’s obviously a distraction — to most people they think it’s a distraction — but I grew up learning how to deal with that stuff and I honestly thought it was flattering. The officers take care of that. I don’t really care.”

The rivalry between Koepka and DeChambeau dates back to mid-2019 but has heated up considerably after a video of Koepka’s visible displeasure with DeChambeau leaked to social media last week. The clip exploded on the internet and spawned a series of aforementioned potshots between the two golfers. After his round Friday, DeChambeau insisted he has no ill-will toward the four-time major champ.

“I’ve got nothing against him, I’ve got no issues at all,” he said. “If he wants to play that game, that’s great. I’m going to keep trying to play my best game and when it comes down to it, when somebody’s that bothered by someone else it is flattering.

“He’s had stuff with other people too,” DeChambeau continued. “Like Rory and numerous others. So this isn’t a one-off thing. So, you know, it’s just the way he deals with stuff and I’m totally fine with it.”

Jordan Spieth, who was in DeChambeau’s grouping, said the taunting was difficult to ignore.

“[I heard it] a lot. Yeah, quite a bit,” he said. “Any bad hole, someone was yelling [Brooksy], and then any good hole people were yelling, ‘Go Bryson!’ almost louder. It was like a pseudo-rivalry and he’s not even here.”

Spieth’s advice? Stay out of it.

“He mentioned it to me at one point and I said, ‘All anyone wants is a reaction and you give it to them, then it’s going to get worse,'” Spieth said. “So it didn’t seem to bother him.”

For the most part, DeChambeau heeded that counsel Friday. He smiled, waved toward fans and flipped a ball to a child on his walk to the 1st tee box. His only complaint, he said, was not with what the fans were saying, but when they were saying it.

“No, I’m proud of the way that I’ve handled the situation. I think that people think that it bothers me, it really doesn’t,” he said. “I mean, that one video clip that came out the other day, it was more of the person saying it in my backswing than anything that bothered me. It wasn’t the fact that he said ‘Brooksy’ or whatever. It was just, he said something at an inappropriate time. If he said peanut butter and jelly at the wrong time I would have probably said the same thing. They can say whatever they want, I’ve got no issue.”

Koepka, despite playing this week, had the final comment on the day. He posted a 30-second video on Twitter.

“What’s up, guys?” he said, before discussing a giveaway for anyone whose time was “cut short” at Muirfield Village on Friday. “It’s Brooksy.”