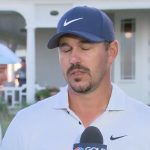 Brooks Koepka during a leaked Golf Channel interview at the PGA Championship, with Bryson DeChambeau in the background.

The Brooks Koepka–Bryson DeChambeau rivalry, which has included comments over pace of play, abs and red ants, has a new addition: golf spikes.

And a viral eye roll.

In a 45-second, previously unseen video posted to Twitter on Monday night, Koepka began to answer a question from Golf Channel’s Todd Lewis after Friday’s second round of the PGA Championship, then stopped 22 seconds in as DeChambeau walked behind him. Both the noise of DeChambeau’s metal spikes and the words “the last hole” are audible — and Koepka appears less than pleased.

Koepka shuts his eyes for a couple of seconds, rolls them, shuts them again, then unloads.

“Christ,” Koepka says. He tries to continue with his answer, but can’t.

“I lost my train of thought,” Koepka says, paired with some colorful language.

After a five-second pause, Lewis says, “We’re going to enjoy that in the TV compound.”

When contacted by GOLF.com, Koepka’s agent, Blake Smith, said he had “no comment regarding the video.”

Golf fans flocked to the clip on Twitter, Facebook and Instagram, which is where DeChambeau responded. On the Golfers Doing Things Instagram post of the video, which had the caption: “Brooks is not a fan of Bryson and his spikes,” DeChambeau wrote:

“You know you can fix spike marks now,” adding a laughing emoji.

The interview, video and reaction are the latest chapter in the Brooks-Bryson rivalry, which dates to at least January 2019, when, on a Golf Monthly podcast, Koepka commented on DeChambeau’s pace of play. That topic surfaced again in August of that year at the Northern Trust, when DeChambeau asked to talk to Koepka about it, and they met face to face on the practice green minutes before their final rounds.

From there came talk of six-packs and four-packs. In early January 2020, as DeChambeau was beginning to add size to get longer, he was asked how he compared to Koepka — and answered with a comment about pictures in ESPN’s Body issue. “I don’t think his genetics even make him look good,” DeChambeau said on a Twitch stream. “Did you see the Body Issue? He didn’t have any abs. I have abs.”

To which Koepka responded with a picture on Twitter of his four major championship trophies and the caption: “You were right @b_dechambeau I am 2 short of a 6 pack!”

Then, at the WGC-FedEx St. Jude Invitational in late July, a day after DeChambeau argued for relief from red ants, Koepka made a similar plea — to his caddie, Ricky Elliott.