How to watch the 2021 Solheim Cup singles matches at Inverness 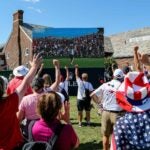 The 2021 Solheim Cup will conclude with 12 singles matches at Inverness Club in Toledo, Ohio.

The 2021 Solheim Cup continues Monday, September 6 with the grand finale: 12 singles matches that will decide the outcome of the 17th edition of the event, which is being played at Inverness Club in Ohio. Luckily for those of us who aren’t there in person, much of the final day will be carried on TV. Here’s what you need to know to watch the action from the comfort of your couch.

What channel are the 2021 Solheim Cup singles matches on?

There has already been drama aplenty at the 2021 Solheim Cup, with an unusual ruling making headlines on Saturday and tightly-contested matches throughout.

The American team is coming off a shocking loss in the last event, where the Europeans pulled of an epic comeback in the singles matches to win the Cup in Scotland.

Now the U.S. team is trailing by two points heading into Monday singles as they attempt to mount a comeback on home turf.

You can watch the Solheim Cup Sunday singles action on Golf Channel, which will be airing coverage from 12-6 p.m. ET.