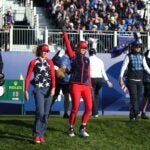 American stars Nelly and Jessica Korda teamed up at the 2019 Solheim Cup.

The American and European squads are ready to begin the 2021 Solheim Cup at Inverness Club in Ohio. Here’s everything you need to know to watch the tournament.

How to watch the Solheim Cup

On the LPGA Tour, the year of 2021 will always be remembered for the meteoric rise of Nelly Korda, and as we approach the start of the 2021 Solheim Cup, Korda the younger is once again front and center. While Nelly made her debut at the 2019 Solheim Cup, teaming up with older sister Jessica for two matches on her way to a sterling record of 3-0-1, a lot has changed since then.

Korda is now the World No. 1, a major champion, and the owner of an Olympic gold medal. But she has her work cut out for her. The American side is coming off a big loss to Team Europe in the last playing of the Solheim Cup. This year the U.S. has a far superior team on paper, but once team play begins, especially with the typically high emotion and stress of a Solheim Cup, anything can happen.

Korda will have to play her best if she hopes to lead the Americans to reclaim the Cup. The European team will be led by the most recent major champion, Anna Nordqvist. The Swedish veteran topped a trio of players by one stroke at Carnoustie to win the AIG Women’s Open. It was Nordqvist’s third major title, With six Solheim Cup appearances under her belt and a 12-9-2 record, she will be a force to be reckoned with at Inverness Club, the host course for the event.

The event will take place over three days, with team matches scheduled for Saturday and Sunday, followed by the final day of singles matches on Monday to decide the winner. You can find out exactly how to watch the Solheim Cup below, including full TV and streaming schedules. Tee times and matchups for Day 1 will be released later in the week.

How to watch the Solheim Cup on TV (ET)

You can watch the 2021 Solheim Cup on Golf Channel and NBC. Golf Channel will air coverage on all three days of the competition, with NBC broadcasting midday coverage on Saturday and Sunday. Check out the full TV schedule below.

How to watch the Solheim Cup online, streaming

You can stream the 2021 Solheim Cup online in various ways. You can watch the Golf Channel coverage at golfchannel.com/watch and the NBC broadcasts at NBC.com by logging in with your cable credentials.

You can also stream the NBC coverage on Peacock, NBCUniversal’s streaming service.

SIGN UP FOR PEACOCK PREMIUM TO WATCH THE 2021 SOLHEIM CUP, THEN ENJOY EVERYTHING THE PLATFORM PROVIDES