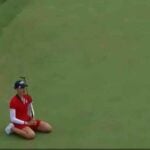 TOLEDO, Ohio — Playing in her second straight session of the day at Inverness Club, Nelly Korda found herself in the midst of a tight four-ball match against the European duo of Nanna Koerstz-Madsen and Madelene Sagstrom.

With a large contingent of fans following the match, which was tied through 12 holes, Korda faced a big breaking putt for eagle on the par-5 13th hole.

She pulled back her putter, made contact with the ball and watched as it tracked all the way to the edge of the cup.

Korda’s putt looked so good that she dropped to her knees in disbelief when it stopped just shy of tumbling in for eagle.

But what happened next might have been a saving grace for Team USA, which struggled in the morning session to put points on the board.

In an attempt to concede the remaining tap-in, Sagstrom picked up Korda’s ball and tossed it to her.

That’s when things got interesting…

After a brief conversation between Koerstz-Madsen, Sagstrom and a rules official, the U.S. side was granted a 1-up lead.

The confusion centered around whether Korda’s ball was overhanging the edge of the hole. If it was, she was entitled to a reasonable amount of time to reach her ball and 10 seconds to determine whether the ball had stopped moving.

“If any part of a player’s ball overhangs the lip of the hole, the player is allowed a reasonable time to reach the hole and ten more seconds to wait to see whether the ball will fall into the hole.”

Sagstrom and Koerstz-Madsen contended that the ball was not overhanging the hole when they picked it up. But after officials reviewed video replay and a photo of the ball, they determined that Korda’s ball was in fact ever-so-slightly overhanging the cup.

In this instance, picking up Korda’s ball took away her right to make her way to the hole and the 10-second wait time to determine if the ball had stopped moving.

“Obviously I wasn’t following the rules about leaving the ball for 10 seconds,” Sagstrom said afterward. “But I do believe in integrity and honor of the game of golf, and I would never pick up a putt that had a chance to go in.”

As a result, Korda’s putt was considered holed and she and Ewing went 1 up, an edge they maintained through the remainder of the match. The turn of events breathed some much needed life into the U.S.’s bid to win back the Solheim Cup.

“We had no ill will,” Ewing said. “But the rules committee did reach that decision. It rattled both teams and we had to fight through it.”