Solheim Cup leaderboard: 3 things to know after Saturday at Inverness 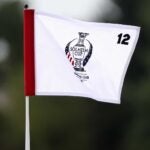 Day 1 of the Solheim Cup is officially in the books, and if you didn't catch the action, check out three things you missed.

TOLEDO, Ohio — Day 1 of the Solheim Cup is officially in the books, and Team Europe holds a healthy three-point margin at day’s end. If you didn’t get to tune into the action, check out three things you missed below.

1. Fanfare on the first tee

Fans began lining up for seats surrounding the 1st tee before the sun even had a chance to peek over the horizon. And for those who braved the early-morning wake-up call, a grand scene was the reward.

Music pumped through the speakers, the cheers were deafening, and “Quiet Please” signs were in short supply. The good vibes were apparent, and they reverberated through the grounds at Inverness.

However, those good vibes would not last long.

Click here for a full recap of the first-tee fanfare.

The European team looked like a mismatched underdog on paper, but they quickly dispelled that notion with their play in foursomes. Although all four matches reached the 18th hole, the Euros held tough and earned 3.5 points for an early haymaker to the Americans on their home soil.

“Obviously absolutely delighted,” European captain Catriona Matthews said. “We got off to a fantastic start winning three-and-a-half to a half.”

That momentum carried into the afternoon fourball session. Early on the front nine during the afternoon, Europe led all four matches and looked to be heading for a rout. The Americans were eventually able to scrap two points out of the session, but the European dominance was apparent as they lead 5.5 to 2.5 heading into Day 2.

The Europeans’ ability to come through in the clutch was an obvious talking point, but perhaps the biggest story on Saturday was a bit of rules drama involving Nelly Korda and Madelene Sagstrom.

The unusual ruling came on the 13th hole and proved to be the difference in the match as the Americans won 1 up.

“Hopefully [the Europeans] are okay with us,” Korda said. “We didn’t want it to happen this way. It’s very unfortunate, but they played solid golf, we also played solid golf. At the end of the day hopefully we can put this behind each other and move forward.”

You can read more about the rules drama here.