Did Nick Watney’s WHOOP band help him figure out he had coronavirus? 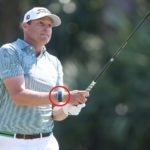 Nick Watney's WHOOP strap may have tipped him off that he was getting sick before his coronavirus diagnosis.

On Saturday, the PGA Tour announced that the 11 people who came in close contact with him tested negative.

Watney’s diagnosis triggered the Tour’s safety protocol, which meant contact tracing to find out who Watney might have come into close contact with while he was traveling to and playing at Harbour Town in Hilton Head, S.C. That list includes his caddie, Joe Navarro; playing partners Vaughn Taylor and Luke List; their caddies; and Sergio Garcia, who flew with Watney to the event. In all, the Tour tracked down 11 people to re-test for coronavirus.

While Watney was forced to withdraw from the RBC Heritage, everyone who came into contact with him was able to continue on to the third round, including McIlroy, who revealed after his round that Watney’s WHOOP band is what tipped him off that he might be sick.

According to McIlroy, who had a brief discussion with Watney on the practice green prior to the second round, Watney told him that his WHOOP had picked up some unusual breathing activity while he was sleeping.

“Nick said the thing that got him yesterday morning was he wears a WHOOP strap,” McIlroy said. “A lot of us, we wear these WHOOP straps on the wrist or on the biceps. One of the big telltale signs that they’ve found over the last few weeks they’ve done studies where, if your respiratory rate goes up during the night by more than two breaths per minute, that’s sort of a tell tale sign that you might have something.”

According to WHOOP’s website, a “Red Recovery” signals that a user’s body is run down, which could mean that they are getting sick. While WHOOP can’t predict what illness a user is coming down with, the company has seen “WHOOP data predict that an individual has sickness or illness before they feel symptoms.”

While it’s impossible to know exactly what Watney’s WHOOP strap told him, it at least appears to have tipped him off that something was wrong. That information, combined with whatever symptoms he may have been feeling, is likely what spurred him to consult with medical professionals on site, get tested and WD from the event. It’s also what likely helped prevent Watney from spreading the virus to others on site.

Watney will now go through the safety protocol established by the Tour and self-isolate for at least 10 days.

What's the difference between foursomes and four-ball?

Bryson DeChambeau's protein shakes are on sale this weekend