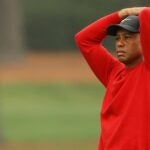 Tiger Woods resolve on Masters Sunday was something to behold.

This Thursday morning, on the one-week anniversary of Tiger Woods’ opening 68 at the Masters, I find myself thinking about his closing six holes, on Sunday. He made that 10 on the par-3 12th. (A moose, old golf hands were calling it by Sunday night, hands above the ears, fingers spread out.)

And then there’s what he did from 13 to the house.

Two-putt par on the par-4 14th, after nearly holing his first putt, from 35 feet.

One-putt birdie on the par-3 16th, after stuffing a tee shot to the uncustomary back-right Sunday pin.

One-putt birdie on the par-4 17th, making a six-footer.

And then to the par-4 18th, where at last year’s Masters he made a leaking-oil bogey to win on Masters Sunday. This year, on Masters Sunday, he made a one-putt birdie on that hole, after an uphill take-that 315-yard drive and a holed putt from 5 feet.

As you’ve read a hundred times by now: After making 10 on 12, Woods played the final six holes in five under par.

No two-hour period in his golfing life ever revealed more about the man.

The athletic pride. The pride of the man. The ultimate secret to his success.

Tiger’s natural gifts are obvious to anyone who has been watching him over the past quarter-century. (Woods is 44, with a smooth face and scarred body.) But his fierce pride, his obsessive desire to make virtually every shot count, makes him one of the best grinders to ever play the game. It is why you can never count him out. He’ll make the cut. He’s come back from physical injury and personal humiliation. He has been down but he has never been out.

Woods made that moose and you know what he had to be thinking to himself: that’s not me. He got, to use a phrase of his father’s first game (baseball), the red ass. As he has his whole career, Tiger turned anger into focus and focus into superb golf.

The whole thing brought to mind a famous Joe DiMaggio quote. A reporter asked the great Yankee centerfielder why he played so hard. “Because there’s always some kid who may be seeing me for the first time,” DiMaggio said. “I owe him my best.” That’s Tiger, even if his gaze is more inward than to the rope lines. Tiger is going to show himself. It’s not by coincidence that Tiger raises Bernhard Langer’s name on a regular basis these days. He sees himself in Bernhard. Bernhard has no quit.

At the Memorial Tournament this year, Woods had a solid first-round 71. He looked good. As is often the case these days, his body is day-to-day. In the second round it seemed like he might not break 80. He finished with two birdies and a par for 76 and made the cut on the number.

When he came in, he was in a grumpy mood but took questions from reporters anyhow. I happened to be last in line (there was a line) and asked him to define grinder.

“Anyone who fights all day,” Woods said. “Guys that don’t ever want to make bogeys.”

His pride helped him return to golf’s pinnacle after he endured the humiliation of his private life being turned inside-out in 2009 and 2010.

His pride helped him win again — at East Lake, at the Tour Championship, in September 2018 — after yet another back surgery and the humiliation of a DUI arrest. His pride is his secret weapon. It’s why he’s always prepared. He always has a plan.

Have you noticed, over the years, every time you see him he looks like Tiger Woods? The pressed pants. The tucked shirt. The erect carriage.

The pride of the man.

Over the years, Tiger has had some random pairings on weekends, with players trying to make it in the game. More than once, these players have asked him for advice. He always says some variant of the same thing.