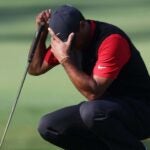 AUGUSTA, Ga. — The thing that will never cease to amaze me is how golfers, at no point in time, are ever insulated from things completely imploding. On Sunday at the 2020 Masters, after 15 majors and 20,154 holes, golf came for Tiger Woods: He made a 10 on Augusta National’s famed par-3 12th, the hole he played so clinically during his iconic victory here last year.

How did it happen? Let’s break it down. But first, a disclaimer: The content you are about to consume contains a graphic, detailed shot-by-shot breakdown of a number so big that it’s offensive to most golfers. If your sensibilities are delicate, please turn away.

It’s cold and cloudy on the ground here at Augusta, and Tiger has been struggling physically since Thursday.

If you have long days like this, I’m going to get a little bit sore, which I definitely am,” Woods said after his 25-hole day on Saturday.

The wind is gusting heavier than it has been all week, and as the wind swirled around the Augusta pines on the 12th, the thoughts about how to manage all of it were moving in Tiger’s head. He set up over the ball once, then backed off, then stepped into it again.

Onto the drop zone with his work cut out to save bogey.

Tiger hit a good shot that landed a touch shorter than he would’ve liked. And when the ball comes in with that much spin on such a steep false front, it’s got no chance. I obviously cannot go inside Tiger’s mind, but if I had to guess, he was trying to get too cute with the pin as he tried to save bogey, and it backfired.

One more from the drop zone!

You’ve just hit two shots in the water, short, both of which found land before rolling back into the creek. So what do you do? You make sure no matter what you get your ball over the water — and that’s what Tiger did. He overcooked it into the back bunker. Not good, but dry.

Look, Tiger did not hit a good shot here, but it was also a pretty impossible shot. He had no stance, and the process of getting into it did no favors for Tiger’s back. He tried his best, caught it thin, and winced as the nightmare continued.

He could go back to the drop zone or hit another from the bunker. He opted for the latter.

On his second try, Woods wasn’t trying to hit a hero shot, he was just trying to get the clubface on the ball. He did that; chunking it out six yards in front of him and finally giving himself a putt at it.

Facing a delicate downhill 15-footer, Tiger was not going to end his story with a three-putt. He hit a good put that had a chance, but ended on the low-side.

Nightmare over. But for as disappointed as he undoubtedly was by his 10, Tiger should be proud of the fortitude he showed with five birdies on his next six holes.

When you can't stop topping the ball, take a moment and do this

This LPGA rookie's healthier routine has her feeling better than ever