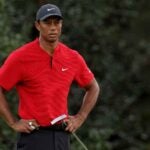 Tiger Woods was none too happy mid-round after walking off the 12th hole.

Tiger Woods had no designs on winning the 2020 Masters when he began his round Sunday. He was simply too far back of the lead. But that didn’t keep him from grabbing everyone’s attention during his final round.

Woods was ushering his way around the course in ho-hum fashion, two over par on the day thru 11 when he dumped his first tee shot into Rae’s Creek on No. 12. After taking a drop from the area short and right of the hole, he zipped his ensuing pitch shot off the front of the green, back into the drink.

Unfortunately for him, that was far from the end of it. Woods sent his fifth shot into the back bunker, from which he bladed his sixth over the green and back into Rae’s Creek. Using his fourth ball on the same hole, Woods played his 8th onto the green and two-putted for 10. Sheesh!

As you could assume, it looked quite messy on the track function on Masters.com.

So, what went so wrong at the famous 12th? Woods was tortured by a switching wind.

“I committed to the wrong wind,” Woods said to Amanda Balionis later on. “The wind was off the right for the first two guys. When I stepped up there it switched to howling off the left … I didn’t commit to the wind and I got ahead of it and pushed it, too. … That just started the problems. From there I hit a lot more shots. Had a lot more experiences there in Rae’s Creek [laughs].” Woods, always a grinder, had six more holes left in his 2020 Masters. He was staring down a really brutal finish — potentially a round in the 80s. But as he has shown an ability to do in the past, Woods turned it on.

You could say that again. His six birdies Sunday pushed his total for the week to 15. He finished the week in the red at one under.