Tiger Woods and son Charlie to compete in PNC Championship: ‘It will be incredible’ 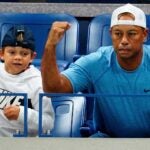 Charlie and Tiger Woods as teammates? We love the idea of that.

Just when we thought we had seen the last Tiger Woods performance of the calendar year, the 44-year-old has committed to an event he’s never played before.

And he’s bringing his 11-year-old son Charlie with him.

The father-son duo will compete in the PNC Championship, an unofficial Tour event, Dec. 17-20, in Orlando. The unique event, which pairs top pros with family members, will be Tiger and Charlie’s first as a team, and Charlie’s first time playing under the bright lights.

“I can’t tell you how excited I am to be playing with Charlie in our first official tournament together. It’s been great watching him progress as a junior golfer and it will be incredible playing as a team together in the PNC Championship,” Woods told PGATour.com in a statement.

Usually this time of year Woods has one more competitive start — the Hero World Challenge, which he hosts — but that tournment was canceled this year. Now he’ll make the trek up to Central Florida for four days of golf with his son. The tournament itself is just two rounds, on Saturday and Sunday, the 19th and 20th. It will be broadcast for four hours live each day on NBC, Peacock and Golf Channel.

For those who might not think Charlie is ready for the big show, he’s been progressing rather quickly as a junior. We’ve seen him dominate local junior events in South Florida, with a 15-time major winner as his caddie.

We’ve seen his swing in action and heard that his dad put blade irons in his hands early on, much like Earl Woods did for Tiger, to make him comfortable playing top-notch equipment. That’s according to Jack Nicklaus.

“Charlie is starting to play golf, and he’s getting a really good swing,” Nicklaus said during his Masters press conference last week. “He says, I’ve got blades in his hands so he learns how to play golf instead of learning with all those forgiving golf clubs.

According to PGATour.com, the Woods family will not be the only first-timers taking part in the PNC this December. Justin Thomas, one of Woods’ neighbors in Jupiter, will also be playing in the event for the first time with his father, Mike.

Will there be some side-action between the Woods and Thomas families? It’s completely plausible. Recall that during Woods’ 2019 Masters victory, Thomas and Charlie were smack talking and discussing plans for a putting contest in the Augusta National clubhouse.