Tiger Woods’ first round in the 2020 Masters was weirdly good 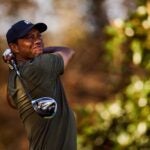 Tiger Woods' first round at the 2020 Masters was somehow worry-free.

AUGUSTA, Ga. — It was as strange, and about as good, as any round Tiger Woods has played in any major championship.

You can shoot a first-round 68 on mechanics alone, but Tiger didn’t, even though his mechanics, for the first time all year, were excellent.

Yes, of course: Mechanics were the starting point, as they always are, for every golfer in every round. Woods, like the other 91 contestants, was playing a long, soft golf course, and he played it conventionally. He drove, for the most part, long-enough and in play. He hit irons pin-high and watched them come to a screeching halt on the mushy-for-a-day Augusta National greens. He putted solidly on a day you could putt boldly. He played few shots, approach or greenside, out of the long, wet rough.

(File this under weird-but-true: Augusta National had long, wet rough. Stu Francis, the USGA president, was walking through the long, wet rough on Thursday as he followed the Woods group. If you call the rough here the “first cut” you must be the proud owner of a club dictionary. Woods calls it the rough. He calls his green jacket a coat. He calls the pitcher’s mound at Dodger stadium “the bump.” If you follow his lead on these matters, it will serve you well. Really, if Augusta National is going to go down this we-actually-have-rough road, they should probably give the players a “courtesy cut,” a pretentious term of the biz to describe the narrow path of short grass that takes a player through the rough from tee to fairway.)

OK, let’s get back to game day here, shall we? Here are some sub rosa reasons Tiger shot a bogey-free 68, four under par.

*He shot 68 because the last time he played a competitive round here — April 14, 2019 — he won the Masters. Memories light the corners of my mind. (Yes, it’s an insipid song and lyric, but whatever.)

*He shot 68 because he’s won the Masters five times and knows the course about as well as anybody in the field. To quote somebody, knowledge is power and, to quote somebody else, experience is the best teacher.

The occasion here was not just the first round of the year’s last major. It was the first round of a major that, like any of his majors here on out, could be his last best chance. We say that because (understatement alert!) he knows and likes this course and has played it well and he much prefers to play on warm, humid still days, owing to his aching back. He got one on Thursday. He might have three more(ish) before 60 Minutes goes up Sunday night. Note to Dr. Richard Guyer, Tiger’s back doctor: his gait was perfect on Thursday.

Man, was it a strange day. Tiger was on the practice putting green behind the 1st tee in the dark of 6:50 a.m. when Gary Player and Jack Nicklaus hit their ceremonial first shots. His original tee time was 7:55. But, because of a nearly three-hour rain delay, he didn’t go off until after 11 a.m., staring on No. 10. Going off the 10th does kind of feel FedEx Cup playoff-ish.

When Tiger was on the practice green, and Jack and Gary were called to the tee, Tiger couldn’t hear it, because of a moaning drone overhead. He was amused. When did Augusta National start allowing low-flying drones at the Masters? This year, evidently.

There has been a lot of pre-tournament discussion about what it would be like to play a Masters without fans. But it should be noted that Tiger has played thousands of rounds of golf without fans, including two dozen or so at Augusta National, during normal member play. Watching up-close-and-personal was an amazing experience.

As a reporter or a special-guest visitor or an off-duty tournament worker, you could get right up to the action. There might have been a hundred people, or far less, following Woods and his playing partners, Shane Lowry, the British Open champion, and Andy Ogletree, the U.S. Amateur champion. Among the few, the lucky, the walking: Andy’s mother; a doctor on call; Suzy Whaley, the president of the PGA of America. Also Rob McNamara, Tiger’s aide-de-camp, and Erica Herman, Tiger’s girlfriend. Without the usual throng following Woods, it had all the intensity of a country-club member-guest playoff.

And at the same time (advance apologies for the mental whiplash), Thursday was also completely absorbing and utterly intense. Tiger in full flight, as he was on Thursday, is always intense. Ditto for Tiger seizing the day. He was fortunate to get the whole round in. He won’t get his second round in on Friday.

Oh, and this was exciting: He made a 4 on the 5th, the long par-4 where he made four bogeys last year. And still he won by one.

Wet, or wet underfoot, was the order of the day. Wet and muddy. Joe LaCava’s white caddie jumpsuit had mud splatters around the ankles at the end of his workday. When Tiger plucked grass for wind-reading purposes, whole tufts of mushy grass came up.

He also had the advantage of good playing partners. He likes Shane Lowry, a good bloke with a natural golf swing who does not believe the hype. Tiger has played with dozens of overeager hot-shot amateurs, trying too hard to start conversations with him. Andy Ogletree was the opposite of that.

“He’s very intense,” Ogletree said, after being asked what he took from playing with Woods. “He takes every shot very seriously and hits every shot with a lot of integrity.” Kudos, young Andy, for your spectacular use of the word integrity. You might be interested to know that Tiger sometimes describes poor shots as hollow.

“I think that understanding how to play this golf course is so important,” Woods said after signing his card. “I’ve been lucky enough to have so many practice rounds throughout my career with so many past champions, and I was able to win this event early in my career and build myself up for the understanding that I’m going to come here each and every year.”

He talked about Jack Nicklaus, Raymond Floyd, Bernhard Langer, Fred Couples — his forebears. Former Masters winners who played every year and often well, in their mid-40s and late-40s and through their 50s.

Keep this up, Tiger, and you’ll be on that list, too.