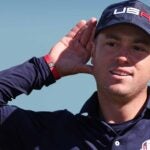 The U.S. has gained a big lead heading into the final day of the Ryder Cup.

We waited three long years for this Ryder Cup and now, after an action-packed week at Whistling Straits in Haven, Wis., we’re quickly reaching the bitter end. The Americans lead the Europeans 11-5 after four sessions, but 12 singles points are up for grabs on Sunday. If Europe is going to win, it will need an epic comeback. Just ask Ian Poulter.

“We’re not in a good position, and it’s going to take a beyond monumental effort,” Poulter said on Saturday night. “So we need a couple of miracles.”

All times ET. Refresh for updates. Newest entries will appear at the top.

4:37 p.m. ET: And there we go! Morikawa drains his short birdie on 17 to go 1 up, guaranteeing at least a half point. One more hole makes it official.

4:31 p.m. ET: It looks like it’s come down to two players for the clinching point: Morikawa or DJ. DJ is 2 up with three to play, while Morikawa remains tied through 16. On 17, Morikawa hits an incredible approach to three feet. Making this putt could be the decider!

4:21 p.m. ET: DeChambeau hands Garcia his first loss in singles since 2008, defeating him 3&2 on the 16th hole. Team USA is now a half-point away from clinching the cup. Collin Morikawa is the next match — he’s tied with Hovland though 15.

4:03 p.m. ET: DeChambeau is now dormie, 3 up with three to play — guaranteed a half point. Inching closer to victory!

3:47 p.m. ET: The next three matches all appear to be locks for Team USA, with 3 up leads. Morikawa is clinging to a 1 up lead on Hovland, and behind him DJ is 2 up.

3:33 p.m. ET: Cantlay just won the 15th to go 3 up on Lowry with three to play. Meanwhile, Rahm is fighting to stay alive in his match with Scheffler, draining a short putt for birdie on 14 to keep his match alive. He’s 3 down with four to play.

3:25 p.m. ET: The first point of the Sunday singles looks likely to go Europe’s way, as Rory McIlroy narrowly misses a chance to close Schauffele out on 15. McIlroy is now dormie — 3 up with three to play.

3:11 p.m. ET: Schauffele clawed one back from McIlroy with a birdie on the par-4 13th to get to 2 down, and McIlroy claimed one right back on No. 13 to go 3 up with four to play. Meanwhile, the U.S. leads in the next six matches.

2:39 p.m. ET: McIlroy is now 3 up through 11, but the next four matches are all in Team USA’s favor: Cantlay, Scheffler, DeChambeau and Morikawa are all at least 2 up. Scheffler is 3 up on Rahm at the turn. DJ just earned first blood against Casey, winning the 6th to go 1 up.

2:28 p.m. ET: It’s early yet, but if things hold the way they stand now, Collin Morikawa, 1 up through 6, can claim the clinching point for Team USA.

2:14 p.m. ET: DeChambeau drains ANOTHER clutch putt on No. 7 to go 2 up on Garcia. All 12 matches are out on the course. Morikawa is gathering steam, winning three straight holes from Viktor Hovland to go 1 up through 6.

1:56 p.m. ET: The U.S. currently holds two solid 3 up leads: Cantlay over Lowry, and Scheffler over Rahm. Rory is 1 up through 8, DeChambeau is 1 up on Garcia. Funny moment: The crowd was audibly bummed when DeChambeau switched to 3-wood instead of driver on the 6th, and DeChambeau replied “Guys, I’m still going for the green, calm down!” Then he proceeded to hit it nearly pin high, though he missed the green left.

1:35 p.m. ET: With seven matches through one hole, Team USA leads three, Europe leads three, and one is tied. Cantlay is now 3 up on Lowry, Rahm won his first hole to cut Scheffler’s lead to 3 up, and DeChambeau is 2 up on Garcia.

12:57 p.m. ET: We’ve got some red on the board! Though McIlroy is now 2 up on Schauffele through 4, Cantlay birdied the 3rd to tie with Lowry, Scheffler made his second consecutive birdie to go 2 up on Rahm, and DeChambeau eagled the first — with a 30+-foot bomb!! — to go 1 up on Garcia.

12:42 p.m.: The U.S. is on the move! Scheffler goes 1-up after a birdie on the first. Just behind, Scheffler’s team partner this week, Bryson DeChambeau electrified the crowd by blasting his drive on the 492-yard first hole onto the green. He’s got 15 feet for eagle.

12:30 p.m.: Quick recoveries for both Cantlay and Schauffele. Cantlay made a brilliant sand-save on the 1st to keep his match even, while Schauffele rolled in a TOUGH birdie on the 2nd to stay 1-down (related: Rory finally looks like Rory for the Euros). Back on the first tee, the only match with a favored European — Rahm vs. Scheffler — is underway.

12:23 p.m.: A NERVY start for the Americans. Xander Schauffele begins his match 1-down against Rory McIlroy after pushing a sub-3-footer on the first green. Behind them, Patrick Cantlay airmails his wedge approach over the green to give Shane Lowry a look at birdie and a 1-up lead.

12:08 p.m.: Andddddd we’re off!!! A current of electricity is rippling through the American faithful at Whistling Straits — a group on the cusp of realizing the first American Ryder Cup in five years. Rory McIlroy and Xander Schauffele each blast their tee shots down the first fairway, coming to rest on the fringe of the first green.