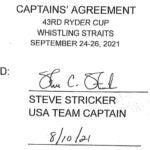 HAVEN, Wis. — You don’t need to be a contract lawyer to fully grasp every word of the 16-page Captains’ Agreement between Steve Stricker and Padraig Harrington at this 43rd Ryder Cup, but it wouldn’t hurt.

The document, which was shared with the media Tuesday, isn’t the breeziest of reads — it includes phrases such as “penalty for breach of condition” and “clarification of envelope substitute rule.” But it’s not without intrigue, either. That’s partly because these agreements aren’t usually made public, and partly because of all the thought that clearly went into finalizing it. Indeed, much of the agreement is dedicated to policing and litigating scenarios that are highly unlikely to ever happen.

But enough preamble! Here are 9 highlights that caught our eye:

1. Players may practice on the course while other matches are underway

Per the agreement: During play, it is permitted for non-participants to practice on the course under the following conditions:

Per the agreement: Each team may only have up to a maximum of six (6) “Team Golf Cars.” All such carts must follow the agreed upon routing with no access to nine of the holes. Any cart/driver not abiding by such routing may be removed from use for the remainder of the week.

3. Stricker is prohibited from making any further course set-up tweaks

The course is long, the rough is light, and that’s how it will stay for the remainder of the week.

Per the agreement: It is recognized that the home side has the opportunity to influence and direct the set-up and preparation of the course for the Ryder Cup. It is hereby agreed that any such influence, direction and/or preparation will be limited to course architecture/course design, fairway widths, rough heights, green speed and firmness, and will conclude the Sunday prior to the matches. (Sept. 19)

4. Pairings decisions must be hand-delivered to a specific location

Per the agreement: It has been agreed upon that Team Captains must give their Team Selection to the PGA of America Rules Office in the parking lot to the left of the practice range. (The agreement also spells out designated times by which the captains must deliver their selections.)

Per the agreement: In foursomes, both partners are required to be ready to play at their starting point no more than 5 minutes after their starting time. Unless the Committee decides that exceptional circumstances prevented a player from starting on time. (The penalty for failure to start on time is loss of the first hole. Penalty for lateness beyond five minutes is disqualification.)

But there are exceptions!

—In foursomes, if the partner who will play second has gone forward on the hole, near where the ball played from the teeing area is expected to come to rest, he will be treated as being present at his starting point.

—In fourball, if one partner is missing there is no penalty. The match starts on time and the absent partner may join between the play of two holes.

Per the agreement: Injured or sick player after a match starts:

—Foursomes or singles: loss of match!

—Four-ball: remaining partner can play on. The sick or injured partner may rejoin should he recover.

7. Captains can dole out mid-match advice to their players but only face to face

Advice must be given in person and not via radio, telephone or other electronic means.

8. Every match is on the clock

Note: A whole bunch of things must happen for a player to actually be penalized for slow play. In other words, don’t hold your breath.

9. If the matches don’t finish by Monday…

Per the agreement: If all matches cannot be completed on Monday (due to inclement weather or another unforeseen force of nature), the results of any completed match will stand, and any match not completed at the time of termination of play will be considered a tied match.