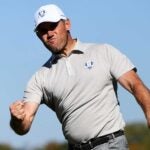 Lee Westwood, during the 2016 Ryder Cup at Hazeltine National Golf Club in Minnesota.

Dustin Johnson was worried he’d miss the ball. Justin Thomas described it as an “out-of-body experience.” Shot one on the first tee box at a first Ryder Cup hits differently.

“There’s no first tee experience like the Ryder Cup,” U.S. captain Steve Stricker said. “It is an unbelievable experience. They show up early. They are loud. They are boisterous. They are full of passion and energy.”

Stricker, with half of his American side set to see it for the first time beginning Friday at Whistling Straits, said he’ll have his rookies “go out there a little bit early just to see that first tee before they get there to hit their shot.” Of course, if they really want to know it’s like, they could take another walk:

To the other locker room.

“It’s always a double-edged sword, I guess,” said Sergio Garcia, who’s played in nine Ryder Cups and 39 matches. “It’s nice to have a lot of rookies on the team because you have a lot of energy and a lot of new faces, but at the same time, there’s a lot of pressure you know they are going to feel, even playing at home.

“It’s going to be interesting to see how they all react to what comes to them.”

A look at the Ryder Cup experience of the U.S. and European teams:

A look at the European Ryder Cup roster

Jon Rahm: Rahm, ranked No. 1 in the world, won the U.S. Open in June for his first major championship, and finished in the top 10 in the year’s other three majors. However, he enters the Ryder Cup after both battling a stomach illness and missing the cut at last week’s Fortinet Championship. He’s played in one Ryder Cup, going 1-2-0.

Tommy Fleetwood: Fleetwood, ranked 37th in the world, has yet to win on the PGA Tour, but has won six times internationally. He’s played in one Ryder Cup, memorably going 4-0 while being paired with Franceso Molinari in 2018 before losing in singles.

Bernd Wiesberger: Wiesberger, ranked 63rd in the world, automatically qualified for the team during the last tournament to do so, the BMW PGA Championship. He’s yet to win on Tour, but has won 10 times internationally. This is his first Ryder Cup.

Tyrrell Hatton: Hatton, ranked 19th in the world, has won once on Tour (the 2020 Arnold Palmer Invitational) and six times internationally, including last year’s BMW PGA. He’s played in one Ryder Cup, going 1-2-0.

Rory McIlroy: McIlroy, ranked 15th in the world, has won 19 times on Tour and eight times internationally, though his victory at the Wells Fargo Championship in May was his first since October of 2019. He’s played in five Ryder Cups, going 11-9-4.

Matthew Fitzpatrick: Fitzpatrick, ranked 27th in the world, has yet to win on the PGA Tour, but has won six times internationally. He’s played in one Ryder Cup, going 0-2-0.

Paul Casey: Casey, ranked 24th in the world, has won three times on Tour and 16 times internationally, including the Omega Dubai Desert Classic at the start of the year. He’s played in four Ryder Cups, going 4-3-5.

Viktor Hovland: Hovland, ranked 14th in the world, has won twice on Tour (the Puerto Rico Open in February of last year, and the Mayakoba Golf Classic in December of 2020) since turning professional just over two years ago. This is his first Ryder Cup.

Lee Westwood: Westwood, ranked 35th in the world, is his team’s oldest (48) and most experienced Ryder Cupper. He’s enjoyed a career renaissance of late, winning the European Tour’s Race to Dubai last year and finishing second in back-to-back weeks on the PGA Tour this year (the Arnold Palmer Invitational and the Players Championship). He’s played in 10 Ryder Cups, going 20-18-6.

Shane Lowry: Lowry, ranked 42nd in the world, has won twice on Tour, including the 2019 Open Championship, and three times internationally. This is his first Ryder Cup.

Ian Poulter: Poulter, ranked 50th in the world, has not won since the 2018 Houston Open, but the Postman is one of the most famous Ryder Cup players in history. He’s played in six, going 14-6-2, which includes a 5-0-1 mark in singles.