Tensions run high at Ryder Cup as Americans pull away 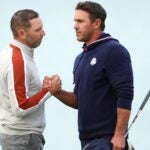 HAVEN, Wis. — The afternoon session began with Daniel Berger and Justin Thomas slugging beers on the first tee, revving up the crowd. It ended with Shane Lowry burying a par putt at No. 18, tossing his putter and bear-hugging Tyrrell Hatton as the pair claimed a precious point.

In between there were five-plus hours of chippiness, tension and heroism as Team Europe tried clawing its way back into the Ryder Cup.

The testiness began on the very first hole of the day’s second session, which began with Team USA up 9-3. Shane Lowry was miffed when he was forced to brush in his two-footer for birdie to tie the hole, and made that sentiment clear by using his putter as a yardstick. That mimicked Justin Thomas’ mock-measurement from the earlier session, a move Thomas actually debuted at the 2019 Presidents Cup. There are layers to this pettiness.

There was some ambiguity as to whether Lowry was having fun with the gesture or making a point. There was no such ambiguity two groups later, when Bryson DeChambeau faced a par putt of similar length and placed his putter on the green before walking off, stone-faced.

“I think I understand their point of view. Sometimes really early on in the match it’s like they are trying to see what — you know, how your putting is in the beginning. I understand that,” DeChambeau said after the round.

“But I know, for me, it was 2 1/2 feet. It was nothing. It was straight up the hill. It’s one of those things that for me I felt like it probably should have been given just as a courtesy but it wasn’t, and I knocked it in the hole and kind of made a funny gesture just in good jesting and that got me a little heated up for the rest of the round.”

Match play nearly always showcases ruling weirdness, and that’s exactly what happened when Jon Rahm found the water with his tee shot off No. 5. The four players in the group settled on an appropriate point of entry, but something got lost in translation by the time Rahm went to take the actual drop. Jordan Spieth and Rahm’s caddie Adam Hayes had an animated exchange of ideas — the sort of thing you’d never see week-to-week on Tour.

The two eventually separated, Rahm took his drop and by the end of the hole, they’d brokered a peace agreement over fist bumps. But there was no questioning just how much each player wanted it.

Every step of the way, the fans fed into the tension in the air. Saturday’s double sessions lasted some 11 hours, beginning to end. Fans got tired. They got testy. They got drunk. They got restless. The atmosphere reflected their uneasiness.

There was something more than just tension in the air, too: There was wind. Gusts made golf especially difficult — “really, really tricky,” Poulter called it — and it confused spectators, too: Was it warm? Was it cold? Tommy Fleetwood wore a confused combination of short-sleeve shirt and beanie. Austin Johnson, caddying for his brother Dustin, wore shorts but a large puffy jacket. It’s tiring, existing in the wind.

Before and after Ryder Cups, sports pundits debate whether it’s sporting or not to cheer a poor shot from your opponent. During this Ryder Cup? There has been no debate. American fans delight in every European ball that finds one of Pete Dye’s thousand-ish dastardly bunkers. They root for chips to scoot farther past the hole. They applaud when putts lip out. This results in an aggregation of frustration for Team Europe’s players and caddies. Several snapped at fans, one snarled at a cameraman and they held their hands towards the crowd before nearly every swing, imploring the crowd not to belt out “Watch out for Lake Michigan!” or some such suggestion.

That atmosphere is, of course, terrific for the actual action. Fans were invested. Players were, too. The European team showed some life early, leading in three matches for several holes. Their supporters grew more vocal, if more desperate in their pleas for points. They tried to generate their own momentum.

The focus for the folks in yellow and blue was to gain two points back from the six-point deficit. That would get the score to 10-6, the same number they’d come back from on the final day at Medinah in 2012.

The only match that wasn’t close was the final fourball. Rory McIlroy and Ian Poulter tied up their match on the fifth hole but then lost 6, 7 and 8. That’s exactly where the match stayed until Collin Morikawa ended it with a birdie at No. 15. But Team Europe clung to leads in the other three for most of the session. Hope remained.

Brooks Koepka made birdie at 13 to draw level with Rahm and Garcia, but they answered with birdies at 15 and 16 to establish the 2 and 1 winning margin.

Lowry and Hatton held a 1 up lead on the 14th tee, and they maintained that lead with high-octane birdies at 14 and 16 plus pars at 15 and 17 to set up Lowry’s must-make par save at 18, the moment of the week for Europe thus far.

Ten-to-6 seemed more than plausible when Match 3, Fleetwood and Hovland, stepped to the 14th tee 1 up, too. But DeChambeau birdied 14 and then Scheffler birdied 15 and 16, setting up a 3 and 1 victory and an 11-5 Sunday morning advantage.

After the round, the Europeans took full responsibility for the deficit, making only veiled references to the challenges of the crowd.

“The crowds were just like they have been all week, so it wasn’t any different,” Garcia said with a shrug. “We are not going to give up, that’s for sure, and you know, I love these guys. They are freaking amazing. Every time I think of them, I want to cry. They are unbelievable.”

Asked about the partisan crowds, European captain Padraig Harrington offered no objections, either. “I would definitely say the Wisconsin people are…really nice,” he said. “It took a while to get used to the different sounds. Silence is golden when it comes to the Europeans this week. Silence means we’ve hit a good shot.”

The rest of the team put on a good face while acknowedging the dire nature of their situation.

“We’re not in a good position and it’s going to take a beyond monumental effort. So we need a couple of miracles,” Poulter said.

“Hopefully we can rally and at least give them something to maybe sweat about tomorrow,” McIlroy added.

But it was Shane Lowry who delivered not just the putt of the day but the quote, too:

“I’ve always wanted to play in a Ryder Cup, and obviously, look, we are a few points behind, but I mean, I’m not stopping believing,” Lowry said. “I don’t care. I think I’m having the week of my life here, honestly, I really am. It’s just been incredible. It’s an incredible experience. You know, I really hope we can go out and give them loads tomorrow and just put up a good performance.”

Sunday won’t lack for intrigue, nor passion. Twelve of the competition’s 28 points are still unclaimed. And if Saturday was any indication, watching the way those are claimed will be well worth the price of admission.