RSM Classic: An emotional Camilo Villegas contends and 3 things to know after the second round 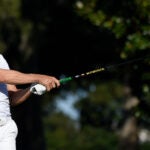 Camilo Villegas hits his tee shot on the 18th hole at the Sea Island Resort Plantation Course on Friday.

The 22-month-old daughter of one of the contenders died in July of cancer. The contender returned a month later, and he is playing this PGA Tour season on a medical extension due to a shoulder injury. He’s seeking his first victory in six years. It’d be a helluva story if he got it. Here are three things you need to know after the second round of the RSM Classic at Sea Island Resort in Sea Island, Ga.

Camilo Villegas is in second

Camilo Villegas, while warming up before his first round on Thursday, said he saw a rainbow. Which his daughter, Mia, loved. Which is the color ribbon he wears on his hat in her memory.

“I started thinking about Mia and said, ‘Hey, let’s have a good one.’” Villegas said Thursday.

He did Thursday. A six-under 64 on the Seaside Course at Sea Island Resort. And he did Friday, too. A six-under 66 on the Plantation Course. It’s his personal best for 36 holes and puts him two strokes off the lead as he looks for his first win since the Tour Championship in 2008.

Villegas was asked Thursday if it’s difficult not to get emotional during a round when he’s thinking about his daughter.

“You know what, I just did a little bit when I mentioned her name,” he said. “When I’m out there, I’m so focused, there’s so much going on, especially under these conditions. I’m there with my brother (his caddie), and you just follow a process. So to answer your question, you’re so focused on what you’re doing that it doesn’t really – I’m not going to say it doesn’t distract me, but like I said, when I got on the range and I saw a rainbow – hey, listen, here it is. She loved colors and rainbows, and my wife was all about it. And it was cool. It was a nice way to start the day.”

Robert Streb, whose lone Tour victory came in 2014 in Sea Island, shot a nine-under 63 on Friday on the Plantation Course for a 14-under total and the two-stroke lead over Villegas.

Three shots behind Streb are Bronson Burgoon and Patton Kizzire, and four shots back are Harris English and Kyle Stanley.