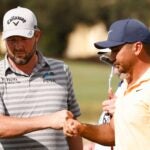 Marc Leishman and Jason Day on Friday after their birdie on the 9th hole at Tiburon Golf Course.

They won last year. And in 2017. And in 2014. They were runners-up in the years between their first two victories here, too. In a surprise to no one then, they are just a shot off the pace after 18 holes this year. Death, taxes, and Kuch and English. Here are three things you need to know after Friday’s first round of the QBE Shootout at Tiburon Golf Course in Naples, Fla.

It’s also little shock that Jason Day and Marc Leishman, friends, countrymen and Presidents Cup teammates, are out in front in a team event. During the first-day scramble format, the Australians birdied 12 holes, chipped in for eagle twice and shot a 16-under 56.

“I love the way he drives the ball, but I think the biggest thing for Leish is that he’s — he’s pretty much an all-around player,” Day said. “He keeps it out in front of him, hits a lot of good quality iron shots in regards to, like, getting it, you know, somewhere around pin high, doesn’t get himself into too much trouble, and then when he does, he’s got a tremendous short game as we saw today on 6 and 10. Just really, really nice short game. His putting, he’s always been a good putter, but like it’s really impressive to watch. Especially, I was able to sit back and watch him stroke it today, and everywhere he aimed it, it was just like perfect role every single time, so it was nice to be able to watch that. For me, just in case he missed one, I was able to kind of get a good sense of where the putt was going and I was fortunate enough to hole some coming in.”

Defending champions are a shot back

One shot back heading into Saturday’s modified alternate shot format (both players hit drives, and alternate shot begins from there) are the team of Harris English and Matt Kuchar, the defending champs, and the team of Graeme McDowell and Corey Conners.

English and Kuchar carded 15 birdies (but no eagles), and McDowell and Conners had 13 birdies and an eagle.

“Yeah, played really solid, gave ourselves a lot of chances,” English said. “Didn’t have any eagles today, we were close, but it’s all about making putts. Matt made a couple good 20-, 25-footers, and that’s what keeps the round going, that’s what keeps the momentum going. We tend to play the back nine really well here, got off to a good start on 10 and kept it rolling, and I guess we shot eight-under on the back nine. Keep giving ourselves chances and keep seeing those putts go in.”

Bubba Watson and Lexi Thompson are three behind

Three shots behind the leaders are the teams of Bubba Watson and Lexi Thompson (the only woman in the 24-player field), and Kevin Na and Jason Kokrak. Four strokes off the lead is the team of Hudson Swafford and Brian Harman, who were college teammates at Georgia.

Watson had one of the more notable shots of the day, when he hit a spectator over the green on the 350-yard, par-4 13th, the ball ricocheted back toward the hole, and Watson rolled in the putt for an eagle two.

“Well, it was an amazing day,” Thompson said. “He had a lot of fun. Like he said, we had a lot of good conversations out there. I think we did great about ham-and-egging it out there. I made a few birdies on the front, and then he came through on the back, hitting on the drivable hole to about 10 feet and then making a 2 on his own ball. That’s all great with scramble and just working as a team. It was just a lot of fun. I enjoyed watching him play for the first time in person, so I’m looking forward to the next two days with him.”