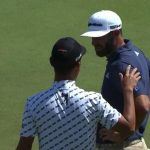 Kevin Na said he "froze" after Dustin Johnson quick-pulled a putt at No. 11.

When Dustin Johnson quick-scooped a one-foot par putt at No. 11, Kevin Na had three choices.

First, he could ignore the move altogether. It was just a one-foot putt, after all. It’s hard to imagine any Tour pro not conceding a putt of that length, and if he’d had the chance, he certainly would have had Johnson pick it up. Plus, the match had no real implications for Na anyway; his 0-2 record had already eliminated him from the WGC-Match Play before the final match began.

His second option was the exact opposite. Technically, because Na had never conceded the putt, when Johnson picked his ball up Na would have a reasonable argument that he’d lost the hole. This is the exact scenario that led to an uncomfortable moment between Sergio Garcia and Matt Kuchar two years ago; Kuchar stuck to the literal interpretation of the rules and Garcia’s quick actions cost him the hole. At the time, Kuchar essentially said that he’d had no choice; because he hadn’t conceded the putt, Garcia lost the hole.

Na’s third option would be to mention something to Johnson on their way to the next hole, a heads-up of sorts, to avoid any future awkwardness. Even though Na himself was eliminated, he’d be upholding his obligation to the rest of the field to play a fair, complete match against Johnson.

Instead, Na seemed understandably stuck between options and instead chose a fourth door. Johnson had left the green and begun the walk to the 14th tee when Na called him back. The two met near the hole, where Na placed his hand on Johnson’s shoulder and explained the situation.

“I know it’s this close, but you still have to wait,” Na told Johnson, holding out his fingers to demonstrate the putt. Johnson didn’t say much in response, and what he did say wasn’t picked up by microphones. On the way off the green, Na made it clear that he wasn’t claiming the hole; he was just making a point.

After the round, Na — who still faced a three-footer for par when Johnson missed his putt — explained what he was feeling in that moment.

“He had six inches and obviously it’s good, but I hadn’t said anything and he whacked it,” Na said. “And I was like – I froze there and looked at [his caddie] Kenny, and I wasn’t going to say ‘that’s a penalty, you’re going to lose the hole. I was going to say, ‘y’know what, that was good anyway.’ I didn’t want to be over that putt and be thinking about that.

“So I called him over and I said ‘Hey, I’m not going to take the hole from you but I just want to let you know before I said something you whacked the ball. But I’m going to give that putt to you so we’ll call it a half and go to the next hole.

“That’s what we did. I think it’s the right thing to do. I don’t want to say — we all know he can make a six-inch putt, so I think I did the right thing.”

The entire incident was a reminder of the trickiness of match play, specifically conceded putts. Na wasn’t wrong to bring it up. But in hindsight I’m guessing he’d have rather avoided the spectacle of that conversation happening where it did.

What happened after their exchange was at least as entertaining.

At No. 12, Johnson found the water with his second shot, while Na made birdie to tie up the match. Johnson retook the lead with a birdie at No. 13. Na walked in a birdie at 15 to tie it up again; Johnson countered with birdie at 16.

“We were going back and forth,” Na said. “I was 2 up early, lost it. He was up. We were trading punches. Some good birdies out there. I made some good putts.”

But it was Na who punched last and hardest. He poured in a tricky 20-footer for birdie at No. 17 and then stiffed a wedge at No. 18. When he walked in that five-footer he sealed Johnson’s fate: Instead of moving on to a playoff, the world No. 1 would be headed home.

Later Friday afternoon, several golfers stood up for Na’s decision to say something.

“I try to say it loud and clear before they get to the ball,” Jon Rahm said when asked about conceding putts. “But, you know, even if it’s something that I was going to give to them and they do [what Johnson did], I would just tell them the same thing, ‘Hey, next time just wait for me so you don’t get in trouble.’

“I’m very clear in what I say, and then I don’t pick anything up unless I look over and I’m like, ‘Are you sure?’ he said. “It’s like making sure your scorecard is correct. It’s okay to take the little bit of extra time and make sure.”

“I don’t know why you’re asking me this now; I guess something happened today,” Scottie Scheffler said on concession protocol. “I would say that I don’t assume that it’s good.

“I think a lot of times in match play you can make that assumption, but I think it’s always safe to kind of wait and to hear it.”

Johnson didn’t speak to the media after his round, which was typical of most golfers who failed to advance through pool play. But if history is any indication, he’ll move past it quickly. He has a green jacket to defend in two weeks, after all. And he’s not the type to hold grudges.

Na’s headed home too, head held high. “It’s important for pride,” he said of the win. He felt dialed in on Friday, he added, knowing his opponent. “I think it was because playing against world No. 1 I knew I had to bring it today, and on the back nine I did.”

As for any potential long-term animosity?

Some pars are stranger than others.