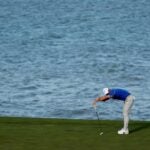 Rory McIlroy on Friday, during his fourball loss at Whistling Straits.

Rory McIlroy was maybe a foot off the fairway on the par-4 14th at Whistling Straits, had just over 120 yards to the flag and held a wedge in his hand. In Ryder Cups past, the shot to follow would be what had given his European captain, Padraig Harrington, the confidence to make him both a Friday morning anchor and one of just four players to play twice.

McIlroy hit it 64 feet, 9 inches short of the hole.

And so it went during Day 1 for the four-time major champion, where approach shots fell 20 yards short of the hole. McIlroy and partner Ian Poulter were rolled in the morning foursomes 5 and 3 by Patrick Cantlay and Xander Schauffele, then McIlroy and partner Shane Lowry were trounced 4 and 3 by Tony Finau and Harris English in the afternoon fourball. In his sixth Ryder Cup appearance, McIlroy went 0-2 in a single day for the first time, and Saturday, he will miss his first-ever session, as he was benched by Harrington for morning foursomes.

“That would be pretty stunning,” analyst Paul Azinger, also the 2008 U.S. captain, said during the Golf Channel broadcast of McIlroy going 0-2. “I think it’s important for the U.S. team to try to put a stop to Rory McIlroy and Sergio and Rahm. Those are the three that count.”

And stopped McIlroy was. In the morning match against Cantlay and Schauffele, he and Poulter lost the first five holes, won the first two holes of the back nine, then dropped holes 14 and 15. In the afternoon, McIlroy never played holes 16, 17 and 18, either. He and Lowry won just one hole, the 5th, where McIlroy rolled in a 30-footer for birdie.

“Yeah, they feed off the momentum of the crowd obviously and yeah, they have just — I mean, the last two sessions, Xander, Patrick, played wonderful, and Tony — I haven’t seen Tony putt as good as that in a long time,” McIlroy said. “When you have got a couple of pairs like that on form, on a difficult golf course where it’s sort of hard to make birdies and they go on runs, if you’re not quite a 100 percent on top of your game, it’s tough.”

McIlroy would know. Over his five appearances, four of which have ended in European victory, he’s gone 9-7-3 across foursomes and fourball. The one team defeat, in 2016, McIlroy finished his best, going 2-0 in fourball and 1-1 in foursomes.

“He’s already a leader,” Harrington said Friday night ahead of the Saturday pairings announcement. “You saw him out there after a tough day; he was out following those matches and supporting his team. He is very much a leader amongst his peers, and I couldn’t have asked more from him during the year; I couldn’t have asked more from him today. Yeah, the golf didn’t go as well as he would have liked, but I’m not second-guessing him for a second in terms of his leadership and what he does for my team.”

On Saturday morning, with Europe down 6-2, McIlroy will be watching.