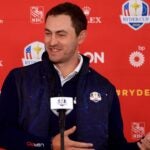 Patrick Cantlay is playing in his first Ryder Cup this week.

That’s probably unfair. Cantlay actually always liked to talk. But only when his interest was piqued, and his interest was rarely piqued by the nuts-and-bolts questions about birdies and bogeys that so often greeted him in the media center.

But in addition to his haul of $17 million, Cantlay’s recent run of form has also netted him an increase in what he deems interesting questions. And he, in turn, is dishing out interesting answers.

So on Wednesday, at the tail end of a lighthearted session with reporters, Cantlay’s final question was about Ryder Cup history. Why, one reporter asked, does Europe keep winning?

There’s plenty to unpack in those first seven words alone. When it comes to gin, most Tour pros prefer the drink to the card game. But Cantlay not only plays gin, but he has read a few (!) books on the subject? Anyway, back to Team Europe.

“If you play enough gin hands, a one or two percent difference in skill translates to almost an assured win over many, many, many hands of gin,” he continued. “But you could have a big difference between somebody, maybe a 60 to 40 percent skill level difference, and gin is still chancy enough to where you could play 10 hands and lose six or seven of the hands than someone that’s much worse than you skill-wise.”

The implication here is fairly clear, and the logic is hard to refute. If Team USA didn’t contend the Ryder Cup on a golf course but instead in a simulation, it’s exceedingly likely that somewhere in that simulation, Europe would win seven of nine Cups at some point despite a slight disadvantage in golf skill.

This, of course, doesn’t include the specifically human factors at play. It ignores the supposed camaraderie advantage inside Europe’s team room, and the effect of the home crowd, and the personalities involved. It’s fairly nihilistic, too. But perhaps that’s a more realistic approach than leaning into cliches about who wants it more.

“These matches are only played every two years, and golf is very chancy,” Cantlay said. “So would it surprise you if the U.S. went on a similar run to what Europe has been on for the next 20 years? It wouldn’t surprise me.”

At this point Dustin Johnson entered through the side door. His media session came next. He gazed up at Cantlay, who was talking about how randomness looks in casinos. Then he shot a quizzical glance at the crowd.

“You go to Vegas and you play roulette and the chances are 50/50 but skewed toward the house a little,” Cantlay said. “It could hit red six times in a row, but that’s not abnormal. You flip a quarter, it would be weird if the quarter flipped tails, heads, tails, heads, tails, heads. Then you would think something trippy was going on.

Then he grinned at the reporter, Doug Ferguson of the Associated Press, who had asked the question.

“You’re really going to ask a question like that and think you’re going to get the right answer? I don’t have the answers to that. This is my first one.”

With that, he climbed down off the stage. Johnson replaced him.

“My answers won’t be that long,” he said. “I just caught the tail end — I didn’t know what he was talking about.”

It was fitting, then, when Johnson was asked the same question and gave a decidedly different brand of answer.

“They just play better. It’s really simple,” he said. “Whoever plays better is going to win. I mean, it’s not rocket science.”

Of course, they’re both correct.