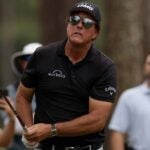 Phil Mickelson is not the biggest fan of the USGA, and he rarely backs down from a chance to make his opinion heard on the latest decisions involving golf’s governing body in the United States.

The 51-year-old PGA Tour star has captured six major wins in his career, but none of them have come at the U.S. Open, the USGA’s flagship event, where he holds the record for six runner-up finishes.

If it’s not U.S. Open course setups (one of which resulted in what Mickelson called one of his biggest career regrets), it’s usually the Rules of Golf, and specifically USGA changes to the rules, that draw Phil’s ire.

And that’s exactly what happened on Tuesday. The USGA released a new local rule limiting the maximum length of a golf club to 46 inches. The official maximum is still 48 inches, but now tournaments and clubs can choose to institute the stricter limit if they so choose.

The rule change is part of a long-running attempt by the USGA to limit distance increases in golf, though USGA Chief Executive Mike Whan admitted in a statement, “this is not the ‘answer’ to the overall distance debate/issue, but rather a simple option for competitive events.”

Mickelson saw things very differently. Just days after capturing his third PGA Tour Champions win at the Constellation Furyk & Friends, he took to Twitter to publicly criticize the USGA’s decision using a quote from beloved movie Forrest Gump, “‘Stupid is as stupid does.’ Mrs Gump,” Mickelson wrote, continuing, “Really though, are the amateurs trying their best to govern the professional game the stupid ones? Or the professionals for letting them?”

The issue is personal for Phil. While according to the USGA only 3 perfect of pros use drivers longer than 46 inches, Mickelson is one of them. He had a 47.9-inch driver in his bag during his epic 2021 PGA Championship win at Kiawah Island. It’s one of the many changes he’s made to keep up with the increasing distances of younger players at his relatively advanced age.

Mickelson has also aired his grievances with the PGA Tour, which said in a statement Tuesday that it plans to enact the rule in tournaments come Jan. 1. On Wednesday morning, Mickelson claimed in a tweet that the Tour did not consult with players before making a decision on employing the rule.

Rory McIlroy, however, contradicted Mickelson’s account. Speaking to the press at the CJ Cup in Las Vegas on Wednesday, McIlroy said, “I was in all those meetings when we discussed it for quite a while, and I think the majority of players are on board with it.”

Mickelson’s remarks this week are not the first time he has commented on the new rule. Back in August upon hearing about the proposed change, he tweeted, “Word is USGA is soon rolling back driver length to 46 inches. This is PATHETIC.1st (sic) it promotes a shorter more violent swing (injury prone,) doesn’t allow for length of arc to create speed, and during our 1st golf boom in 40 years, our amateur gov body keeps trying to make it less fun.”

Mickelson, who received a special exemption from the USGA into the 2020 U.S. Open, is qualified for the tournament for the next five years thanks to his PGA win. You can count on some awkward moments when next year’s championship arrives on June 16 at The Country Club in Brookline, Mass.