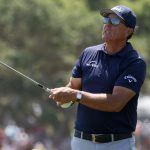 Phil Mickelson, at 50 years old, made major championship history on Sunday at the 2021 PGA Championship by becoming the oldest player to ever win a major.

As for his winning equipment setup, Mickelson made a couple of last-minute changes ahead of the final round. While Mickelson played the first three rounds of the event using a Callaway X Forged UT 3-iron (16 degrees), he switched that out on Sunday for a Callaway Mavrik Sub Zero 4-wood (update: Mickelson said in his post-round press conference that the face of the utility iron cracked before teeing off). Also, after the face of his TaylorMade Original One Mini Driver was flattened prior to the final round, he switched that out for a backup version of the same club.

Below, we breakdown Mickelson’s full bag specifications from his winning Sunday setup. Want to overhaul your bag for 2021? Find a fitting location near you at GOLF’s affiliate company True Spec Golf. For more on Mickelson’s approach to gear testing, check out our previous Fully Equipped podcast below!