Phil Mickelson reveals the secrets to Europe’s Ryder Cup success (and how the U.S. can stop them) 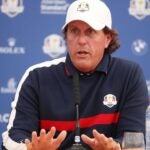 U.S. assistant captain Phil Mickelson thinks he knows why the U.S. often struggles against Europe in the Ryder Cup.

Phil Mickelson will be in the team room as an assistant captain at next week’s Ryder Cup, but for the first time in over 25 years he won’t be teeing it up in matches. That ends a streak that saw the six-time major champion play on more U.S. Ryder Cup teams than any other player in history, putting together a 18-22-7 record in his 12 appearances.

But despite all of those appearances, he’s only been a part of three winning teams. So what gives? Why is Europe so much better than the U.S. in the Ryder Cup?

On a recent podcast episode, Mickelson shed some light on the frustrating losses that have piled up while facing European teams in the biennial event.

Appearing on the debut episode of 5 Clubs with Gary Williams, Mickelson was asked if he had a theory as to why Team Europe was so much more successful in team matches.

“Yea, I do,” Mickelson responded while laughing. Does he ever.

Mickelson took the bait and reeled off a minute-long monologue on the many ways he sees Europe outperforming the Americans. Phil’s theory ultimately boils down to two things. First, the European players are much better than the U.S. in terms of “solidarity.”

That’s very different from the many instances of drama and in-fighting that have plagued the U.S. in past years, and for which Phil is not completely free of blame.

In 2004 and again in 2014, Mickelson publicly criticized losing captains Hal Sutton and Tom Watson for failing to prepare the team properly, something Phil later acknowledged as among his biggest career regrets. But Phil’s criticisms also fit into the second part of his theory on European Ryder Cup exceptionalism: they have a plan.

“I see a game plan heading into the matches,” Mickelson told Williams, referring to the European team. “I see very little uncertainty, everybody knows when they’re going to play and potentially who they’re going to play with. I think that type of structure makes it easier, or gets rid of some of the anxiety and the pressure because you know what to expect. It puts you in a position to play your best and to succeed ultimately.”

As an assistant captain at this year’s Cup, and with his own captaincy likely on the horizon, Mickelson will play a big role in attempting to right the ship and help the U.S. match the European’s superior support and preparation. The good news is, he thinks the Americans are well on their way to making the necessary changes in strategy.

“I see the U.S. starting to do that,” Mickelson said. “We’ve been doing that, and I think we’re going to start to play some of our best golf in the coming years, I really do.”

We’ll find out just how far they’ve come next week. The Ryder Cup begins Friday, September 24 at Whistling Straits. You can check out Phil’s full appearance on the 5 Clubs podcast below.