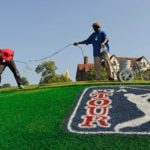 The PGA Tour will be a bit different when golf returns.

The PGA Tour will test for the coronavirus multiple times during tournament weeks, house players in a single hotel, and comply with social distancing, as it looks to resume play in a month, according to the Tour’s new “Health and Safety Plan.”

The report from Golf Channel says that the Tour’s chief operations officer Tyler Dennis sent a memo to players this week outlining the plans for when play resumes June 11 at Colonial.

The memo comes on the heels of Memorial Tournament director Dan Sullivan sharing some of the protocols that his tournament will utilize this summer, such as limited spectator capacity, spectator tracking through RFID in tournament badges, and the absence of grandstands.

“At any time we can know, around the golf course, how many people are collecting in a certain area,” Sullivan said. “We’re considering every venue to be very much like a restaurant or bar … We’re going to manage as the state has mandated at that time.”

Although Memorial is slated to be one of the first tournaments scheduled to allow fans, the insight he shared is sure to be somewhat uniform across the Tour as play resumes.

Last month, the Tour indicated they were exploring options for social distancing during competing that would include players being required to putt with the flagstick in, playing without rakes in sand traps, and pulling their own clubs to minimize contact with caddies. However, the report from Golf Channel did not indicate how many, if any, of these speculative changes will be implemented.

Some players have been vocal in their opposition to these suggested social distancing guidelines. Adam Hadwin and Scott Stallings were particularly opposed to the changes, with Stallings suggesting that some players would choose to abstain from competition rather than play under modified conditions.

“I just don’t think there’s any way guys are going to do that,” he said. “Guys are not going to play for their livelihood with no rakes in the bunker and no caddies. That’s just not going to happen.”

It remains to be seen how golf will differ from what we are used to, but it will almost certainly be different from what we saw when the Tour hit pause at the Players Championship in March.