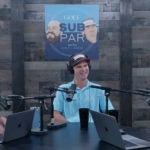 Almost every pro golfer has a good John Daly story. Daly, golf’s everyman, has been one of the game’s most intriguing figures for decades, and he’s been a long-time fan favorite.

Some Daly tales are also the stuff of legend, most notably his love for Diet Coke. In last week’s Subpar Podcast, for example, he told hosts Colt Knost and Drew Stoltz that the most Diet Cokes he’s had in one day was 28. Twenty-eight.

So, with Daly fresh on their minds, two-time PGA Tour winner Kevin Streelman had his own Big John story when he sat down with Subpar this week. Streelman said the first time he was paired with Daly was in the third round of the 2008 Mayakoba in Mexico. Streelman was a rookie, and Daly was the well-known giant he still is today, so Streelman said it was quite the thrill to tee it up alongside him. He also said it was ridiculously hot and humid that day. Streelman was pounding waters. Daly, on the other hand, had a different go-to drink.

“My caddie and I had a wager though,” Streelman said on Subpar. “It was over/under on the number of heaters and over/under on the number of Diet Cokes he’d have. We put it at 18 cigarettes and I think it was 10 Diet Cokes. And he went over on both of those. He had a smoke a hole, two on the par-5s. And he literally had like 12 or 13 Diet Cokes without one single water. It was one of the most athletic things I’ve ever seen in my life.”

Daly shot a one-over 71, and Streelman signed for a 67. He also said the round was a blast.

“He was great,” Streelman said. “Class act. Down to earth. Fun. Relaxed. I really enjoyed playing with him.”

You can watch the entire Subpar episode with Streelman below.