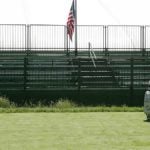 Empty seats could be only the beginning of the changes to PGA Tour golf when it returns. As part of its scheduled resumption in mid-June, the Tour told GOLF.com it is exploring expanding social distancing guidelines in competition.

Under the prospective rules, players could be forced to putt with the flagstick in, play without rakes in sand traps, and pull their own clubs to minimize contact with caddies, among other changes.

Golf’s triumphant—if eerie—return is scheduled to begin at the Charles Schwab Challenge seven weeks from Thursday. If things remain on schedule, June 8 will mark the PGA Tour’s first tournament round in three months, since the Players Championship was canceled after one round of play on March 12.

The Tour will play the first four events on its revised schedule without fans and has said that it could test players before, during and after competition to ensure safe playing conditions.

“We are looking at all options to create a safe environment for resumption of play, in whatever capacity that plays out,” the Tour said.

While restrictive, infectious disease experts have suggested sports could return under circumstances similar to those the PGA Tour is reviewing.

“There’s a way of doing that,” Dr. Anthony Fauci, the director of the National Institute of Allergy and Infectious Diseases said of a return to sports in mid-April. “Nobody comes to the stadiums. Put (athletes) in big hotels, wherever you want to play. Keep them very well-surveilled, but have them tested like every week and make sure they don’t wind up infecting each other or their families and just let them play the season out.”

It remains to be seen whether public health officials proposed the potential guidelines, but commissioner Jay Monahan has repeatedly insisted that the Tour will lean on expert advice in its decision-making.

“The health and safety of all associated with the PGA Tour and our global community continues to be our No. 1 priority, and our hope is to play a role – responsibly – in the world’s return to enjoying the things we love,” Monahan said on April 16. “As we’ve stressed on several occasions, we will resume competition only when – working closely with our tournaments, partners and communities – it is considered safe to do so under the guidance of the leading public health authorities.”