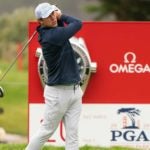 Brooks Koepka has put himself in great position through one round at the PGA Championship.

One round is complete at the 2020 PGA Championship, and the now Round 2 is set to begin on Friday, August 7, at TPC Harding Park. Here’s everything you need to know to watch the second round.

The best scores of the first round mostly came in the morning wave, when Harding Park was blanketed in a marine layer that made its greens more receptive. Two-time defending champion Brooks Koepka is among the players who took advantage of the conditions, firing a four-under 66 to get within one of the lead.

One of the men in front of him after Round 1 is Jason Day, the former PGA champion who has struggled with injuries in recent years. But a large number of players are tied with Koepka one shot behind Day and co-leader Brendon Todd, with a terrific chance to put together a solid round Friday and take the 36-hole lead.

Tiger Woods will also be in the mix in the second round following a five-birdie 68 on Thursday, his first opening round under par in his last six PGA starts. Day tees off for the second round at 4:03 p.m. ET on Friday, and Tiger gets his second 18 started at 4:58 p.m. ET, with Koepka preceding them at 4:36 p.m. ET.

But don’t miss some of the star-studded Friday morning groupings, including Bryson DeChambeau/Rickie Fowler/Adam Scott (11:22 a.m. ET) and Jon Rahm/Phil Mickelson/Sergio Garcia (11:33 a.m. ET), whose second rounds you can watch exclusively on ESPN+.

Here’s all the information you need to watch the second round of the 2020 PGA Championship on TV or stream it online.

ESPN will air the second round of the PGA Championship on TV. In total, ESPN will offer six hours of opening round TV coverage, from 4-10 p.m. ET on Friday, including the entire rounds of Jason Day, Brooks Koepka and Tiger Woods.

How to watch PGA Championship Round 2 online

With ESPN covering the late action on TV, ESPN+ will carry early second round coverage online. ESPN+ will air another six hours of traditional tournament coverage, including the opening tee shots, beginning at 10 a.m. ET on Friday and running through the day until the TV coverage picks up at 4 p.m. ET.

In addition, you can log into ESPN+ to see Featured Group coverage during the second round at Harding Park, which will include one morning group and one afternoon group.

Sign up for an ESPN+ account here to follow all the action all tournament long. The ESPN TV coverage can be streamed on ESPN.com/watch with an active cable subscription. Here’s the complete streaming schedule for Friday:

10 things I noticed wandering Winged Foot at the U.S. Open