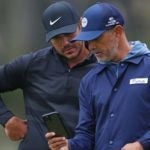 Compared to the run of dominance Brook Koepka displayed in the previous three seasons, this one has been a tremendous disappointment thus far. The four-time major winner has just two top 10s — the second of which coming last week at the WGC-FedEx St. Jude Invitational — and he’s missed four cuts, more than he’s missed over the last two seasons.

But last week in Memphis, Kopeka started to look like the titan of old, battling with Justin Thomas down the stretch at TPC Southwind before settling for a runner-up finish. For the man that stresses the importance of major championships above all else, the timing couldn’t be more perfect for him to find that old form.

He continued that quality play in Round 1 of the PGA Championship. Six birdies, two bogeys, 66. Just another ho-hum day at the office for the man better than all others in major championships for the last several years. And while it’s easy to attribute his hot streak of late to “turning it on at the right time,” it really goes deeper than that, and a key swing change deserves its due.

After missing the cut at the 3M Open last month, Koepka retreated to Jupiter in an attempt to re-find his game. The session at Medalist Golf Club with his coaches Pete Cowen and Claude Harmon III got a little heated, with Koepka even throwing a club down the range in frustration at one point, but ultimately they found the key fault.

“We were kind of looking at some things, and at impact I’m about 70 percent on my left side,” Koepka said. “When we were looking at it, it was the opposite. It was 70 percent on the right side. We knew what we had to do was get on that left side, and it’s been good since.”

It makes sense that Koepka has been struggling to get to his lead side when you consider the knee injury that’s been nagging him since last October. As recently as last month, Koepka even claimed the knee was still nowhere near being fully healthy. With pain in that front-side knee, it can be difficult to properly shift your weight to that left side and cover the golf ball.

When the body sequencing gets off in the golf swing, there are a multitude of swing faults that can result. For Koepka, that poor sequencing will often result in blocking the ball out to the right or hooking the ball left when overcorrecting at impact.

To fix this sequencing and make it easier to get to that left side in a pain-free manner, Koepka said he’s been lining up with his left foot a touch further back. It may look like his stance is open, but it allows him to get to the left side without putting stress on that injured knee.

“It allows me to actually go forward on the left side and really drive off that right foot and not feel anything in my left side,” Koepka said. “It’s nice to feel comfortable over the ball. I’m starting to see it come out of the right pocket, the right window, and that’s exciting.”

If Koepka can keep getting to his left side without any pain, he might just be lifting the Wanamaker trophy for the third straight year come Sunday night.

Why these 'crazy' Jordan Spieth shots were so significant to him