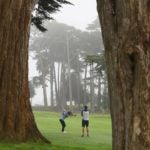 A look at the Marine Layer at TPC Harding.

The long-awaited 2020 PGA Championship at TPC Harding Park has just begun, and fans who tuned in expecting to see their favorite golfers competing under the warm San Francisco sun will, unfortunately, be sorely disappointed. Golfers will have to adjust to the marine layer that often hangs over the course — which, by definition, is a dense grouping of cool, moist air that forms commonly over the surface of large bodies of water.

Temperature, humidity, and air pressure all affect the travel and length of golf shots. The denser the air, the more resistance there will be when you strike the golf ball — leading to more lift and drag. Shots will regularly rise higher, carry steeper, and land shorter.

What does this mean for golfers participating in this week’s PGA Championship? While one may think chilly weather and cloudy skies just serve as a minor annoyance, some of the world’s best golfers are noticing the changes and taking tangible measures to make sure they adjust their game properly.

“Today my clubhead speed with the driver was 115, 116. I was topping out at 116 and a half maybe, and I was getting a couple numbers in Memphis — I was kind of cruising at 119, 120 and I could get it up to 123, 124 if I really, really went after it,” said Justin Thomas on Wednesday, the world No. 1 who won last week’s World Golf Championship in Memphis.  “I mean, that’s a big difference, especially if I’m hitting the ball — if I’m hitting up on it here versus in Memphis. That’s a 30-yard difference.”

“For me, when it’s cooler like this, it’s important just to make sure that my core stays warm, layering up properly. I know I won’t have the same range of motion as I would back home in Florida where it’s 95 every day. That’s just the way it is,” Woods said. “Talking to some of the guys yesterday, they were laughing at their TrackMan numbers already. They don’t have the swing speed or ball speed they did last week. It’s just the way it is.”