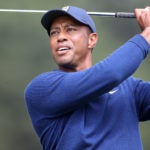 Tiger Woods watches an approach during his first round on Thursday.

SAN FRANCISCO — He stood on the 18th tee, motionless, as if this living legend had already been bronzed. But the moment of repose was cloaked in worry. Tiger Woods squinted through the glare off of Lake Merced and tried to peer through the distant Cypress trees, unsure if his ball had cleared the hazard on Harding Park’s most do-or-die tee shot. The seconds ticked by. This PGA Championship wasn’t hanging in the balance, exactly, but the specter of a crippling double bogey loomed large.

Woods eventually found his ball, and salvation, a few paces over the water, and that stroke of luck nicely summarized his first round at the PGA Championship: a great escape. Tiger fought his swing at times but his middle-distance putting and canny course management carried him to a two-under 68, three strokes off Jason Day’s early lead.

Woods’s par-save on number 18 — he began the day off the 10th tee — was part of a crucial stretch that allowed him to salvage and then build on the round. On the 16th hole he clanked a fairway bunker shot over the green but saved par with a gorgeous pitch. Tiger was so disgusted with his tee shot at the par-3 17th he dropped the club milliseconds after impact. Still made 3.

On 18, after locating his ball in the gnarly rough, Woods slashed out well short of the green, played a cautious pitch far beyond the false front and then buried a 21-footer for another par-save. It’s the kind of momentum-putt on which victories are built. “That was a big putt for me to make after making a mistake on my tee shot,” Woods said. Especially given that this was the much-discussed debut of Tiger’s new putter, a prototype Scotty Cameron Newport 2 Timeless that is longer than his usual magic wand, an older Newport model.

But Woods continued losing tee shots left, leading to a bogey on the second hole. “Those were toe-balls,” he said, “and toe-balls usually go left. For me, it’s about getting the path oriented a little better and I was able to that and start hitting my little cut out there and hit it solid. And I turned a few over, which was nice. Overall, I felt like I was able to make a few adjustments out there during the round and that’s what you have to do.”

With a little more rhythm in his swing, Woods stuffed his approach on 4 for a birdie and then made 14-footers for birds on 5 and 7. He met or perhaps even exceeded his own expectations and sounded surprised to find himself in 17th place. “I felt like if I shot something in the red I’d be right there,” Wood said. “I was able to do it. I didn’t think there would be that many guys at 4 [under] or better, but the greens were soft this morning. If you drove the ball in play, you could get the ball close to some of these flags… The golf course is only going to get more difficult as the week goes on.”

Indeed, the ever-changing conditions at Harding Park will be a big part of the story this week, and much of the pre-tournament fretting centered on how Woods’s delicate back would withstand the potentially frigid weather. On Wednesday afternoon, it got so cold at Harding that many players were wearing ski caps, as if an Open Championship had broken out.

Tiger’s 8:33 opening round tee time felt ominous. But he caught a break when Thursday dawned still and a little balmy, with grey skies but none of the bracing fog that seeps into your marrow. At the appointed time, three dozen reporters and other hangers-on clustered around the opening tee box, a little giddy at having Woods all to themselves. His long list of credentials were announced by the starter and then…nothing. When was the last time Tiger Woods began a tournament round without a single clap? “That was pretty interesting,” said playing partner Rory McIlroy, who overcame wild driving to grind out a 70. “That’s definitely different.”

But Woods still put a charge into this PGA on his opening par-5, going rough to rough but somehow still birdie with a remarkable pitch from the short-side. The 12th hole runs parallel to bustling Lake Merced Blvd. and, despite the dark netting, a couple dozen passers-by strained for glimpses of Woods through the fence. When he pounded a drive a lone cry rang out, rendered all the more poignant by the space between them: “You da man, Tiger!”

On the next hole he buried a 33-foot birdie putt and, from a rooftop across the street, a handful of fans jumped up and down and cheered wildly. It was a sweet sight in these troubling times and a reminder that Tiger is still Tiger; when he is playing well in a major championship he can reshape a skyline.