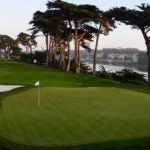 More often than not, when the world’s best players tee it up at a major championship, it’s on a course that’s not easily available for public play.

For example, this year’s other major venues, like Augusta National, home of the Masters, and Winged Foot, site of the U.S. Open, are about as exclusive and private as it gets. But that’s not the case with TPC Harding Park.

The course’s championship layout is located in a prime location on a San Francisco peninsula, surrounded by the pristine shoreline of Lake Merced. The course was originally designed by Willie Watson and Sam Whiting in 1925.

If you’re a San Francisco resident, you can claim the best deal of all when it comes to greens fees at TPC Harding Park. Morning tee times on weekdays start at only $80 per player, while non-residents will face a significantly steeper rate of $300. If you’re not a San Francisco resident but still live in a Bay Area city like Oakland, San Jose, or other surrounding cities, you can still get a bit of a break with a rate of $200 (proof of residency is required at check-in).

Beginning at 3 p.m., weekday rates drop to $63 for San Francisco residents but stay the same for others.

You also have to pay an extra $15 fee to book a tee time between eight and 30 days in advance, and renting a cart will set you back an additional $35 per player.