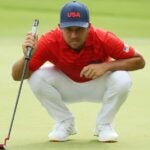 Xander Schauffele charged into the lead in the second round of the Olympics.

Just 36 holes remain before they hand out medals at the men’s Olympic golf competition in Tokyo. Players will jostle for position in the third round to set themselves up for a run at the podium. Here’s what you need to know to watch the third round on TV or online.

Previewing Round 3 of the Olympics men’s golf event

After the first round at the Tokyo Olympics, the four American players in the field were nowhere near the top of the leaderboard. But everything changed in Round 2, thanks to Olympic rookie Xander Schauffele. The World No. 5 blitzed Kasumigaseki Country Club‘s East Course for an eight-under 63. That moved him to 11 under, placing him on top of the leaderboard.

Unfortunately, thunderstorms rolled into the area after Schauffele was done for the day, but not before all players could finish their second rounds. Those competitors will complete their rounds early Saturday morning in Tokyo (Friday evening in the United States), then the tee times will be set and the third round can begin.

One of the pros who still has to finish his second round is Japan’s own Hideki Matsuyama. The reigning Masters champ is six under through 16 holes in Round 2, putting him at eight under for the tournament in a tie for third. Rory McIlroy is one shot further back at seven under.

Below you will find everything you need to watch the third round.

How to watch Olympic Men’s Round 3 on TV

How to stream Olympic Men’s Round 3 online

You can stream the third round Golf Channel TV coverage of the Tokyo Olympics men’s golf competition on NBCOlympics.com and golfchannel.com. Olympics highlights, documentaries and commentary can be found all day long on Peacock.

How to bet on the Olympics