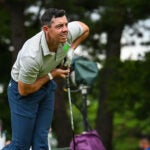 Rory McIlroy fired a first-round 69, but he's six shots back of Sepp Straka.

KAWAGOE, Japan — Day 1 of golf at the Tokyo Olympics is in the books, even if it took a bit longer than expected. A mid-day weather delay took players off the course for a couple of hours and added to what was already soft conditions at Kasumigaseki Country Club.

While golf fans in America may have been able to see some of the action late Wednesday evening, there was plenty more golf played in the middle of the night back in the States. Here are three things you missed overnight from the men’s Olympic golf competition.

1. Austria’s Sepp Straka is your leader, but it might not last long

Sepp Straka of Austria arrived in Tokyo later than most. He got just one practice round in on Wednesday and apparently saw everything he needed to see. He gained two strokes on the field putting and hit 16 out of 18 greens — an undefeated recipe for success.

Straka carded an eight-under 63 from the first group off, playing alongside Belgium’s Thomas Pieters, who shot a six-under 65 on his own. In between the two on the leaderboard was Thailand’s Jazz Janewattananond and his 64. By the time Straka tees off Friday morning, he could be chasing Jazzy J. Check out full scores here.

Kasumigaseki is hosting its first elite professional event in a long time, and the course didn’t exactly fight back against the pros Thursday. The scoring average at KCC came out to 69.5 during the first round, so more than a full stroke under par. In fact, the first group sprinted around the course and finished at least two holes ahead of the next group of competitors.

Thanks to a thunderstorm Wednesday evening, KCC played soft, and its large, undulating greens were as receptive as they’ve been all week. Players took dead aim and half the field broke 70. The course will likely continue to play soft. The aforementioned weather delay added more moisture to the course and the forecast is calling for even more rain, all of it the remnants of Tropical Storm Nepartak that came through the area earlier this week.

3. Thomas, Morikawa and Rory all hovering

Collin Morikawa and Rory McIlroy played together and seemed to have a jolly time on the course. It started with McIlroy congratulating Morikawa on the driving range for his recent Open Championship victory, and it ended with a long dap and some laughs on the 18th green. Both players shot two under and seemed plenty content. But both are capable of much better on a gettable golf course.

Justin Thomas on the other hand, had the most puzzling round of the day. Thomas made nine pars on his front nine and followed up with nine more pars on his back nine for a birdie- and bogey-free 71 he was not pleased with. Losing two strokes to the field on the greens alone will do that to you.

When asked for one word to describe his initial Olympic experience, he was brief. “Par,” Thomas said. “That’s how I would describe it.” (We are here for the brevity, folks.) Later on he was asked about staying patient and delivered perhaps the quote of the day: “It’s really hard. I would love to have some kind of old useless club that I could break over my knee right now. I mean, I’m going to be honest. But you got to stay patient and trust the process.”