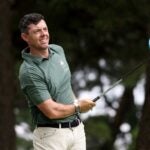 Rory McIlroy put the field on notice early on Day 2 at the Tokyo Olympics.

UPDATE: McIlroy signed for a five-under 66 in the second round to move to seven under for the tournament. He’s tied for seventh, four back of leader Xander Schauffele.

When it’s working, such immense skill occasionally enables the four-time major champion to quickly collect red numbers in bunches, and even change the entire face of a tournament in just a few holes.

And that’s exactly what happened on Friday morning (or Thursday night if you’re in the U.S.) in the second round at Kasumigaseki Country Club.

McIlroy began the day a two under, having marred four birdies with two bogeys in the opening round of the 72-hole men’s Olympic event. He trailed the lead by a distant six shots, but that would all change in a hurry.

As first-round leader Sepp Straka struggled out of the gate, the lead didn’t move from the eight under number where it started the day, with Thailand’s Jazz Janewattananond taking over the top position.

Beginning his second round Friday morning at 8:25 a.m. ET Tokyo time (7:25 p.m. Thursday on the East Coast of the U.S.), McIlroy didn’t immediately show any signs of the onslaught to come, opening with five-straight pars.

But by the time he teed off on No. 9, McIlroy was suddenly just two shots off the lead. A birdie at the par-4 6th hole started his momentum. At the par-3 7th, he made a 2, improving his score to four under.

He did one better at the next hole, rolling in a mid-length eagle putt to reach six under and halve Janewattananond’s advantage. All in all, it was an incredible four-under run in a three-hole stretch.

He nearly kept the run going at 10, but was left stunned when his birdie putt lipped out. With lots of golf left to play, McIlroy is starting to look like the player to to beat in Tokyo and is putting himself in great position to add some more hardware to his already stuffed trophy case.