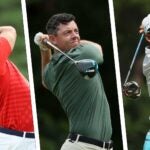 Xander Schauffele will now be asked to fend off an increasingly stacked leaderboard this weekend in Japan.

KAWAGOE, Japan — With all due respect to the 18-hole leaderboard at the men’s Olympic golf competition, there was one thing missing from the first round: the favorites.

They weren’t actually missing, of course. They were just hovering there in the background. Justin Thomas made 18 pars and was snippy about it. Rory McIlroy and Collin Morikawa carded matching 69s, which was just at touch better than average. All those names who we had been told were the front-runners for gold were lingering, somewhere else besides the first page of the leaderboard.

Some of them addressed that on Friday.

Xander Schauffele charged in with a back-nine 30 on the East Course at Kasumigaseki Country Club to see Carlos Ortiz’ 10 under tally and raise him one birdie. Schauffele sits in the lead now after a suspension of play, comfortably in the house at 11 under.

Rory McIlroy held everyone’s attention most of the day after he opened with a 32 on the front. He bogeyed 18, but was plenty content with his 66 and seven under for the tournament. He was headed back to his hotel to watch Equestrian Dressage. “It’s mesmerizing,” he said.

McIlroy’s fellow Irishman Shane Lowry is right there with him, and will probably play alongside McIlroy in the third-to-last tee time Saturday morning. Lowry made seven birdies for a smooth 65.

Japan’s native son Hideki Matsuyama is living up to the immense expectations of the home crowd here in Japan. No player has more media and photographers following him this week, and understandably so. Matsuyama was six under for the day and eight under for the week through 16 holes of his second round, and has five feet for another birdie when he starts back up Saturday morning.

Again, with all due respect to Ortiz, Meito Pereira, Sepp Straka and Jazz Janewattananond, they were not top of mind when the conversation turned from the Open Championship to the Olympic Games. They’re part of the story now, and one that gains intrigue by the day, particularly when major champions play like major champions.

Justin Thomas finally made his first birdie. It’s been a trying week for JT, who made 19 straight pars to begin play. That’s losing golf, and worse than average at this gettable course. Thomas made a double bogey on the 2nd hole after his ball got stuck in a tree, but then made an 18-footer on the 4th. He raised his hands in relief and did the cursory wave to the fans, who are not here.

It stormed and stormed. Tropical Storm Nepartak arrived earlier this week and has left a trail of thunderstorms in its wake. For the second-straight day, players were pulled off the course due to inclement weather in the area. A two-hour and 20-minute delay took place in the early afternoon, and eventually a final storm suspended the second round.

Captain America is stuck in neutral. And understandably so. Patrick Reed has had an incredible week getting over to Japan for the Olympics after ascending from alternate status at the last minute. After an impressive-given-the-circumstances 68 in Round 1, Reed made just two birdies against two bogeys in Round 2. He’s eight shots back and could certainly mount a charge, but the man needs some rest, you’d think. Or a new cape.

The leaderboard is diverse. Considering the best players on-site are largely American, followed by a couple Irishmen, some Brits and a few others, the leaderboard is as diverse as we could have expected. Of those at five under or better (the top 19 players right now), 18 different countries are represented, from Slovakia to Ireland to South Africa, plus Columbia, Austrian and Norway. This is what the Olympics is all about.