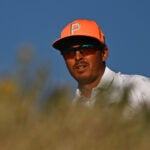 Welcome to the Monday Finish, where we’re wearing orange this week to celebrate Halloween — and the return of Rickie Fowler.

Life comes at you fast.

I got married last week. It was a blast. And we followed that with a weeklong road trip up the California coastline, which meant that for a second consecutive week, I succeeded in watching exactly zero golf. Now? Candidly, I’m doing great but also still fending off the post-wedding emotional hangover! There’s a pretty serious comedown after gathering a whole bunch of your favorite people in one place for a big party. To top things off, I turn 30 today, and I have never particularly liked my birthday, so I opened my laptop this morning facing down a new decade of existential dread.

But you didn’t come here to watch me grapple with the inexorable passage of time. You came, I hope, to read about the golf. Good news: I have now spent an adequate amount of time catching up on that exact subject. I tell you this for the sake of full transparency and also to set up the rest of today’s Monday Finish. Because here’s the thing: I’m guessing you might not have watched very much golf these past two weeks, either. Let’s work through what we missed, together!

There’s a perfect version of his character arc where Rory McIlroy taps back into his original playing identity, rediscovers his mojo and goes on a winning tear. I’ve seen only replays, but it seems like last week marked a step on that journey?

“I think part of the sort of emotion at the end of it was to do with that week, but it was also probably to do with the last few months in terms of searching to try to get better,” he said after winning the CJ Cup. He was talking about his recent frustrations, about his emotional Ryder Cup, about trying to find it. “Sort of the realization that I don’t need to search for anything; it’s all right here.”

It’s all right there. Nowhere like Vegas to do some soul-searching, eh?

She’s still doing her thing, huh? Four wins in seven events. World No. 1 takeover. I’m excited to watch Ko and Korda tangle as we get to year’s end here, because their back-and-forth has been the best part of following the LPGA all season, and it’s clear these two at their best are head and shoulders above the rest.

This is kind of a deep cut, but you might remember the 2018 interview in which K.H. Lee said through an interpreter that he wanted to become — in addition to No. 1 in the world — the “sexiest golfer in the world.”

Well, apparently the PGA Tour made do, at least with a nameplate. The prank itself didn’t necessarily go that well, since Lee doesn’t seem quite sure how to react. But an accompanying story by Chuah Choo Chiang from the PGA Tour includes arguably the greatest quote I’ve read from a Tour pro:

“Being sexy means to be a muscular guy,” he said. “It’s in my dream but not quite possible in reality. I want to be muscular, but I enjoy eating so much. For example, I try not to eat dinner if I have a big lunch, but when dinner time comes, I am usually hungry again. I will work out hard, but I will eat hard as well.”

I can see you at home, nodding along in agreement. (Chiang’s full story is here.)

I was vaguely aware that Fowler was leading the CJ Cup — a bit of a “look-at-me” move given it was my wedding weekend — but I’m happy to see we have signs of Confident Rickie returning. “I’m not surprised — this has been coming,” he said. That’s good. The rest of us were hoping but not knowing. He got Rory McIlroy’s endorsement, too.

Sure, it was just a T3. But that’s a step in the right direction. Holding a 54-hole lead has to be good. And it must be a relief to be playing well given Fowler has a big few months ahead as he takes on fatherhood in November. He suggested as much during a broadcasting stint with Golf Channel at this week’s Zozo Championship, where he dished on a variety of topics.

“Things are about to get very real,” he said. It sounds like he’s in the right frame of mind to take ’em on when they do.

Escaping from the bathroom

European Tour journeyman Jeff Winther stared death in the face and remembered there is only one thing we say to death: “Not today!“

Death, in this case, means “missing your tee time while you’re holding the 54-hole lead.” Not quite as bad, but when you’re running up against the clock and you’re locked in the bathroom of your rental, as Winther was, things could get dark.

He made it out. He won! From the water closet to the winner’s circle. That’s a big Sunday.

Fowler’s Vegas success came on the heels of a visit to longtime advisor Butch Harmon. If that sounds familiar, you may recall that Jordan Spieth’s breakthrough last season came with help from Harmon, too. And while a Golf Channel report confirms from both parties that Fowler was looking for validation, range time and a good hang more than he was chasing after swing instruction, it’s not about the instruction itself with Harmon. It’s about the King Midas touch.

Fowler said during his broadcast stint that he got just the assurance he needed from Harmon. “Good job, keep it going.” From the right person, that sentiment has a lot of power. It’s clear the 78-year-old still has the magic.

Bernhard Langer is 64 years old and just won another event on the PGA Tour Champions. In general, the tour’s storylines surround its youngest players, but Langer is hardly that. Still, he might be the Tour’s most dependable force. And he could beat the heck out of you or me.

The phrase “Loser’s Circle” would feel a bit too harsh, no?

I am happy to have missed this: the unfortunate timing of a Champions Tour playoff clashing with the final round of a high-profile PGA Tour battle. On the bright side, nothing brings golf fans together like raging against TV broadcasts. Hopefully that camaraderie helps when times are dark — like when Lee Janzen and Miguel Angel Jimenez are deadlocked in an extended battle while Rory McIlroy leads in Las Vegas. Oops!

Last week, Mickelson was asked whether he considered it an issue that he’d finished 81st in driving accuracy. He had an answer ready.

“So, I look at longest, like I try to hit it the farthest out here, and I was No. 1 in driving distance,” Mickelson said. “That’s the way I look at it. If you want to look at stuff that’s irrelevant, have at it.”

Credit for Mickelson for teeing off on that one. Credit, too, for Mickelson speaking his mind against the planned rules change banning drivers longer than 46 inches. We like honesty.

But the problem with putting yourself out there is that occasionally the consequences of your own actions rear their ugly head, and that appears to have happened during Mickelson’s closing holes on Saturday, where he finished by torpedoing two drives out of bounds and walking off with a quadruple-bogey 9, earning the announcers’ ire in the process.

Ever have a birthday party where nobody showed up? That’s not what the great people of Bermuda deserve. But this week’s PGA Tour event in Bermuda — the most coveted Tour on the planet, visiting one of the most idyllic places on the planet — can’t even fill its field. Tour pros chose not to go. Those who’d signed up started dropping like flies. The alternates have been saying no, too. Now they’re out of alternates.

Bermuda isn’t the easiest place to get to, and it has particularly stringent vaccine rules, and the players on this section of the list aren’t all full-time Tour pros, so they may not feel game-ready. It’s tough to know which of those factors is the largest contributor. Still, I’ve never heard of anything like it. Plenty of people would swim to Bermuda at the chance to compete. But at last check, Rob Bolton had the 132-player field at … 130 players. You can dive deeper here:

Tonight, I attend my first Seahawks game. It will be, fittingly, 51 degrees and raining. Seattle in late fall — feel the spirit! I’ll report back.

What happens now? Do they start dishing out special exemptions or does the number of players in the field just keep dropping and dropping, with nobody there to collect their goodie bags?

He and Matthew Fitzpatrick are the biggest names actually in the field this week, and while Fitzpatrick is coming off a European Tour victory, Reed — who recently just missed the Ryder Cup team — hasn’t finished in the top 10 on Tour since before the U.S. Open. It’s never easy to top-10 a Tour event, but this might be the best chance.

Our Michael Bamberger went to a golf-course auction. That’s all the information you should need to read the rest here.

See you next week!