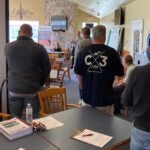 ELKTON, Md. — The plain-Jane golf course here, Patriots Glen, in a dense housing development surrounded by forest, was on the auction block. Early Friday afternoon, the auctioneer, like a referee before a title fight, was explaining the ground rules. The course’s owner, a professional golfer but not a club professional, was in an office, in the back of the spare Patriots Glen pro shop. The opening bid was established at $500,000.  If it didn’t reach that, the owner almost surely wasn’t selling. A par-72, 6,700 yards all stretched out, on 215 acres? It hadn’t been a cash cow, but he wasn’t selling for under a half mil.

The auctioneer, Sherman Hostetter, explained the terms of the auction to the small gathering. Bidders would be bidding on the course, which included its driving range and maintenance buildings. The land could not be developed. The clubhouse was not part of the deal, but the lease to the bar and restaurant in it was. The liquor license was another matter — the new owner would have to secure one from Cecil County. The seller, Hugo Mazzalupi, didn’t own the clubhouse furniture except for bar stools, and he was including them in the sale. Yep, the bar stools. Mazzalupi knows the culture of the game. He’s been knocking around in it all his life.

Elkton is the county seat of Cecil County, and the county courthouse, on Main Street, is about two miles down the road from the course. Elkton’s downtown is like a thousand other small-town downtowns in the U.S., trying hard to hold. There’s no shortage of coffee shops, there’s a terrific hardware store, plus a men’s shop on Main Street with a sporty collection of Stacy Adams shoes. Drive 15 miles out of town and you’re in rural Maryland. I-95 — the Main Street of the Northeast corridor — is 10 minutes away by car. Patriots Glen is in the middle of nowhere and practically in earshot of millions of people. You can make the case, if that’s what you’re trying to do, that owning Patriots Glen is a no-brainer, if you want to buy a golf course. You know how it is, when you want something.

As the auction began, the half-dozen or so gathered men stood in the back of a banquet room, like churchgoers seeking the safety of the back pews. They wore baseball caps and windbreakers and long-sleeved T-shirts. They looked like golfing farmers, or farmers who golf.

Also in the banquet room was a tall, large man with a crew cut named Larry Hirsh. Your gym teacher, circa 1975. He had sunglasses on his head, running shoes on his feet and a roomy gray sweatshirt around his torso. Hirsh is in the golf-course appraisal and selling business. He is managing the sale of Patriots Glen. It was Hirsh who brought in the auctioneer, Sherm Hostetter, with his impressive goatee and his resonant, chesty voice.

Hostetter, too, leans large. He came up in the auction business under his auctioneering father and he cut his teeth selling cattle and cars, as auctioneers in Western Pennsylvania often do. He’ll tell you he can’t get a person to buy something that he or she didn’t want, “but I can get them to spend more than they intended.” It’s a skill with wide application. It’s the eye-contact, the momentary pause, the torrent of words and how you draw out the immortal phrase that begins with Going once. Every auctioneer closes the deal with that. The gavel drops.

Nobody was confusing the Patriots Glen auction for the Modern Impressionist sale at Sotheby’s, and nobody was mistaking the Patriots Glen course for the Pebble Beach Golf Links. When you’re trying to sell a high-end course, Hirsh told me, you’ll contact your contacts, take temperatures, work the phones, press flesh, offer private tours and forensic accounting. In a career spanning decades, he can count on one hand the times he has sold a course at auction. But this time, he thought, it made sense. The interest would likely come from nearby. Patriots Glen is a course that doesn’t need corporate ownership. Its sale wouldn’t require suited bankers to come in, plural. A mortgage, yes. But not bankers. Certainly not investment bankers.

Mazzalupi’s main point, to perspective buyers, and Hirsh was doubling down on it, was that the course could be profitable to own, and enjoyable to operate, for an owner-operator who lived right there, in the Patriots Glen development or near it. It could be an ideal mom-and-pop operation, and if you were trying to raise kids in the game, even better.

Patriots Glen could be an ideal mom-and-pop operation, and if you were trying to raise kids in the game, even better. 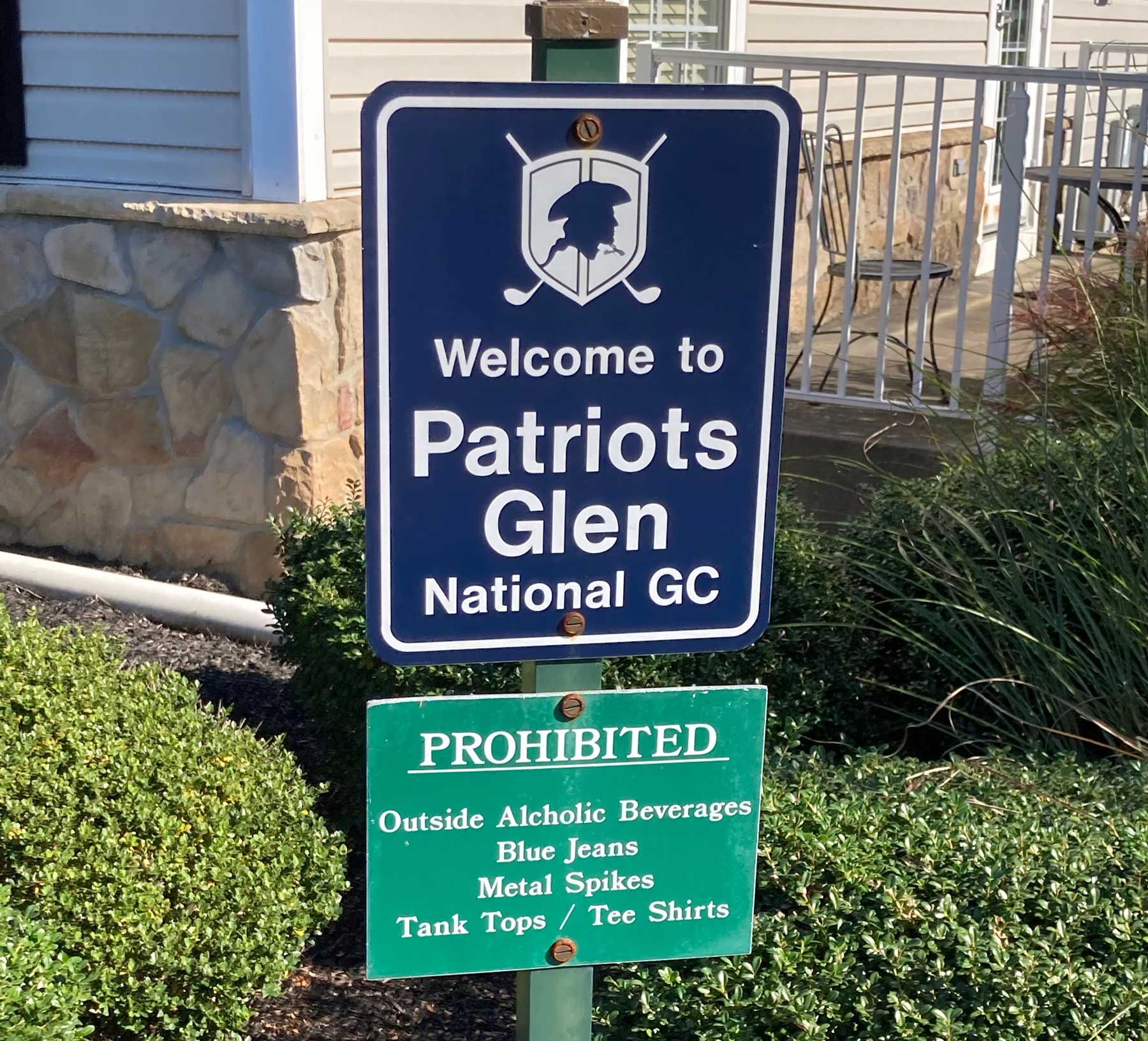 Mazzalupi readily acknowledged that he wasn’t that kind of operator. He lives an hour away by car from Patriots Glen, in suburban Philadelphia. He owns a restaurant and some other businesses. He travels. He plays in tournaments. He has never relied on Patriots Glen to make a living. Patriots Glen, as he was described it to me, sounded like it needed an owner who would treat its 215 acres like a family farm.

He was standing with Hirsh and Hostetter in the minutes before the auction. They all seemed comfortable with one another. Hirsh and Mazzalupi are both members of the Philadelphia Cricket Club. (So is your correspondent.) Hostetter and Hirsh played golf at Penn State together, in the mid-1970s. You know how golf is: everything is intertwined. Before the sale, Mazzalupi was showing photos of what the course looked like when he bought it, eight years ago. It looked like a field, not a golf course. They all knew its history.

I haven’t played the course but from what I saw it appears to a pleasant, simple unpretentious housing-development course with wide fairways and slow, sloping greens and shallow bunkers. There are dense woods bordering both sides of most of the holes. Photographs of it are not likely to land in a year-in-golf calendar. What it is is a place to play and have a beer when you’re done. The clubhouse internet password is ENJOY GOLF.

The men’s room door takes a bit of a shove. Outside alcoholic beverages, blue jeans and tank tops are all prohibited, per a green-and-white sign near the clubhouse. You can play all the golf you want on it, walking, for about $200 a year, but most golfers there are apt to use a cart. That kind of place. You want in?

Every auctioneer has his or her own chant, the hypnotic sing-song rhythm that raises bids, and Hostetter’s is a classic.

Every auctioneer has his or her own chant, the hypnotic sing-song rhythm that raises bids, and Hostetter’s is a classic.

More than once he glanced toward a blank big-screen TV with two young people seated in front of it, monitoring the simultaneous online bidding, had there been any.

The auction didn’t go long. Hostetter called for a break. Nobody had come in at the minimum bid. The three men — the auctioneer, the appraiser and the owner — met in the pro-shop office. Hirsh met with a young man who, among the people gathered, showed the most interest, hesitant though he was. In the pro shop, several regulars expressed surprise that the course did not sell, what with the amount of play it had been getting, its reasonable fees ($4 chili dogs, $56 green fees) and the vast improvement in its condition.

A silver-haired couple wandered into the pro shop, looking to play. A young woman working the auction said to them, “You guys want to buy a golf course?”

Interest is one thing. Want is another. Larry Hirsh said he’d be going back to the drawing board.