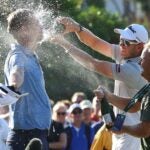 Jeff Winther, left, and Joachim B. Hansen and Soren Kjeldsen after Winther's victory on Sunday at the Mallorca Golf Open.

Just when a door was about to open, the bathroom one shut.

Of all the days. Over the years, the likable 33-year-old from Denmark had been only on the doorstep. Over 30 top-20s split over the European Tour and the lower-tier Challenge Tour. A handful of thirds on both Tours. A high of second, at the 2016 Tshwane Open on the big tour. No wins. No leads after 54 holes on the European Tour, either. Until, finally, Saturday night, where he sandwiched a second-round 71 with two 62s and led by two at the Mallorca Golf Open.

Then came Sunday morning in Spain. Winther can take it best from here.

“After breakfast, I went to have a shower and my wife came in to use the bathroom as well,” he said. “The door closed, and there’s no lock, but we locked ourselves in. There’s no lock on the door, but the handle didn’t work.

“Our little girl, Nora, 6 years old, had to go and find guys at reception to break down the door. We were in there for 45 minutes, I think. I thought, not Sunday, you’re leading the freaking event. Might not get there for your tee time. What a morning.

“I think it probably settled the nerves because I thought I might miss my tee time and thought I might not get out. The kids are in the living room, 6 and 2 years old, what can you do?”

Here’s what he would do. On the par-3 3rd at Golf Santa Ponsa on the Balearic Islands, he’d hit his tee shot up against a tree, only to pull off what the European Tour’s Twitter account described as the “par save of the week,” as the right-hander turned his club and himself around, chipped his ball lefty to about 20 feet and dropped the putt. On the par-5 10th, he curled in a 10-footer for his first birdie of the round. And on the par-4 18th, needing only a bogey to win, he bogeyed to win, sinking a 2-footer.

But he would have done none of it had Nora not navigated her way to help mom and dad. On Sunday, just off the 18th green, after win number one, Winther hugged his wife. Then hugged his heroes.

“I’m overwhelmed,” Winther said. “I’m very pleased to see both my kids here and my friends. It’s fantastic. We’ve got a flight home tomorrow at 10, but tonight is going to be great, I think. … I’m so stoked. I don’t believe it still. It’s weird. I got so many text and phone calls yesterday and didn’t have a chance to reply to all of them. Thanks for all of them.

“I don’t know what to say really.”