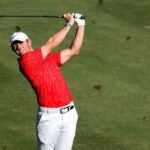 Rory McIlroy strikes an iron at the CJ Cup.

On Wednesday last week, a reporter reminded Rory McIlroy of an unfortunate fact. “It seems astonishing to us that you’re [ranked] No. 14,” the reporter said, which was the truth. McIlroy had spent the last four months outside the top 10 in the world, a stretch we hadn’t seen from him since his rookie season on Tour. Just five days after that reminder, it is no longer an issue, for McIlroy nor the reporter.

McIlroy won the CJ Cup Sunday, shooting 25 under to beat Collin Morikawa by one, and will now jump to No. 8 in the world ranking. Right where he belongs.

It is his 20th career win on the PGA Tour, another number that had been on his mind since winning in May. “I didn’t know if it was going to be this week,” he said, “but I knew if I just kept my head down and keep playing well and keep doing the right things, I’d get there.”

The 20th win is more than just a nice, round number. Lifetime membership on the PGA Tour is on McIlroy’s mind, and one of its requirements is that exact amount of Tour victories. After just a couple more years of play, McIlroy will earn that membership status and be able to set up any schedule he prefers, without having to play a certain number of events. Think: Tiger Woods’ schedule freedom in recent years where he’s played anywhere from 8 to 14 times a year. McIlroy is just the 39th player ever to reach the 20-win threshold, and just the sixth to do it before turning 33 years old.

The win comes in McIlroy’s first event since the Ryder Cup, where he went winless before singles play and delivered an emotional interview to Sky Sports and Golf Channel. McIlroy got choked up talking about how the Cup is the best event in the game, and that being part of a team provides a thrill golfers so rarely get to experience. Moments after tapping in for a tournament-clinching par, he was asked if that emotional Ryder Cup played a role in his win this week.

“It was huge. It really was. I was really disappointed with how I played. I get more emotional thinking about that than even thinking about this. But yeah, there was a lot of reflection the last couple weeks.

“This is what I need to do. I need to play golf. I need to simplify it. I need to just be me. I think for the last few months I was maybe trying to be someone else to try to get better. I sort of realized that being me is enough, and being me I can do things like this.”

Being Rory McIlroy has always been plenty enough on the golf course. It implies great driving — like his 2nd-best Off-the-tee performance this week — and being incredibly solid everywhere else. Mix in a hot putter — McIlroy finished the event No. 1 in Strokes Gained: Putting — and you’ve got a recipe for Tour victories, year after year.

The event was also a significant one for Rickie Fowler, who finished tied for third. Fowler had entered the week as the 128th-ranked player in the world, his lowest ranking in more than a decade. A couple years of struggle have seen Fowler drop from relevancy, even missing out on an invite to the Masters. But atop the leaderboard Saturday night, and dueling with McIlroy Sunday in the final grouping, was Fowler. The man in orange pants cost himself with a double bogey on the par-5 6th Sunday, but he was able to finish strong enough to tie for third with Keith Mitchell, three shots back of McIlroy. It was his first top three finish in more than 30 months.

“It felt good to finally hit the golf ball properly, at least most of the time, for 72 holes,” Fowler said. Sometimes, progress can be that simple.