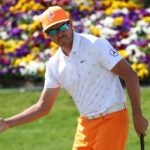 Rickie Fowler on Sunday after a missed putt on the 7th hole at the Summit Club.

But golf fans on Sunday, especially those with two thumbs and a social media account, wanted to watch Rory McIlroy and Rickie Fowler more.

“You have the biggest names in golf like Rory, Morikowa, and Rickie trying to make a comeback and you air the champions tour?!?!” tweeted @BFarraye. “At this rate we won’t see the PGA tour until the leaders are on the FIFTEENTH HOLE!!”

Search some version of “PGA Tour” or “Golf Channel” on Twitter on Sunday afternoon, and you could find more of the same. The issue? Golf Channel was to broadcast the final round of the Champions Tour’s SAS Championship from 2-5 p.m. ET, then show the final round of the PGA Tour’s CJ Cup — but when the SAS went past 5 for a playoff between Jimenez and Janzen, and Golf Channel stuck with it over McIlroy, Fowler and others slugging it out for the lead, fans went to their phones and computers.

To add to the furor, some fans found that Golf Channel’s website was also showing only the Champions event. Viewers then were left to occasional split-screen updates on Golf Channel and online scoreboards.

A sampling of the social media rage:

While golf TV coverage and complaints of golf TV coverage tend to go hand in hand, Sunday’s anger seemed elevated due to both the CJ Cup’s all-star leaderboard and a birdie bonanza at the Summit Club, the event’s host. Eventually, things settled down.