Mickelson-Brady Match 4: What channel is the match airing on? 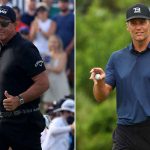 Phil Mickelson and Tom Brady will face off against Bryson DeChambeau and Aaron Rodgers in Montana.

What you need to know about the Mickelson-Brady match

If you can believe it, it’s been more than two-and-a-half years since the original Match — Tiger vs. Phil — was played at Shadow Creek in Las Vegas. For those keeping score at home, Phil memorably prevailed in that Match, though it took extra holes.

The Match II brought Tiger and Phil back together last May, but this time, with partners Peyton Manning and Tom Brady, respectively. The venue? Medalist, in Hobe Sound, Fla. — a course Tiger frequents — and he and Manning managed to prevail on the 18th hole.

Last November, The Match III was played without Tiger. Instead, Phil returned for a round at Oro Valley in Tucson, Ariz., and partnered with Charles Barkley to defeat Peyton Manning and Steph Curry on the 15th hole in what turned out to be the weakest match yet from a competitive standpoint.

That brings us to The Match IV, which has already lit up social media with some epic pre-match smack talk, ignited by a long-simmering feud between DeChambeau and Brooks Koepka.

But hey, this is all in good fun, right? Like previous Matches, this one will also have a charitable hook, with at least $1 million going to My Brother’s Keeper Alliance and a minimum of one million meals going to Feeding America, a portion of which will also be directed to the local Montana Food Bank Network.

The Match IV will be broadcast by Turner sports, with coverage being spread across three of their networks. TV viewers can tune in to TNT, TBS or TruTV beginning at 5 p.m. ET to watch complete coverage of the event, while streamers will have options, too.

What channel is the Mickelson-Brady match on?

What channel: TNT, TBS or TruTV

How to stream: Fans with cable subscriptions can use their account information to log in to TBS.com, TNTdrama.com or TruTV.com to stream the match for free using their desktop browser. Those who wish to watch on a mobile device, tablet, or TV streaming device like Roku or Amazon Fire Stick can stream the event live on the Bleacher Report, TBS or TNT apps.