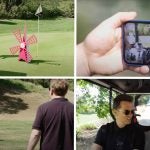 Tom Brady joined James Corden on the links for a new episode of the internet hit "Carpool Karaoke."

Tom Brady is back on the golf course in never-before-seen fashion ahead of his second performance in The Match.

In just two weeks’ time, Brady will look to avenge his nationally televised loss to Peyton Manning and Tiger Woods when he competes in The Match against Bryson DeChambeau and Aaron Rodgers. In that battle, scheduled for July 5 at The Reserve in Montana, the seven-time Super Bowl champion will once again team up with Phil Mickelson in pursuit of golf glory (and an indiscriminate sum of money).

But before Brady does that, he’s got some work to do on the golf course, and evidently, his knowledge of Lin Manuel-Miranda’s Hamilton. In the newest episode of James Corden’s smash-hit “Carpool Karaoke” video series, both host and GOAT head out to the golf course to prepare for Brady’s encore performance alongside Phil.

If they let me and @JKCorden co-star in Hamilton I’ll retire tomorrow.

*May need a teleprompter at times. pic.twitter.com/AgNZMU7l3R

The episode takes Brady and Corden through nine holes at a local club in LA, abandoning the show’s traditional Range Rover in favor of a golf cart.

“This is my favorite hobby,” Brady says of golf. “But doing it with friends is the best part, you get to hang out, get a little competitive, talk a little s—. Put a few bucks on the line.”

At one point in the episode, Brady lectures Corden on the Rules of Golf after the host is seen eyeing in a tap-in putt.

Later in the episode, Brady calls up his Match teammate, Mickelson, for some FaceTime golf advice.

“Partner, listen man, I need a little bit of help,” Brady asks. “I’m teeing off here, kind of a short par-4, but it gets kinda tight up there at the green. Should I play driver or 3-wood? Should I play it for the green?”

“We play driver. That’s not even a question,” Mickelson replies. “We’re here to annihilate and get off to a quick start.”

As Corden begins to ask Phil a question, he’s interrupted by the realization that Lefty is sitting next to the Wanamaker Trophy from his PGA Championship win at Kiawah Island in May.

“We’re having a little bit of a bad connection, I’m sorry,” Phil says with a laugh as he moves the trophy out of sight.

As the episode ends, Brady and Corden take on their own karaoke version of the song “Alexander Hamilton” — a performance Brady later told Twitter would, at long last, be grounds for his retirement from the NFL.

“If they let me and @JKCorden co-star in Hamilton I’ll retire tomorrow,” he wrote. “*May need a teleprompter at times.”

You can check out the full video below.