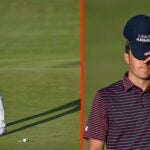 Jordan Spieth's missed two-footer soured a strong third round at the Open Championship.

Jordan Spieth is still very much in contention to win the 2021 Open Championship.

But he’d dearly like to be one shot closer to the lead.

Spieth battled all day Saturday to stay in contention at Royal St. George’s. He was going Full Spieth: Missing fairways, flagging irons, raining long putts and generally doing the unexpected. He made five birdies through 10 holes and worked his way into a share of the lead with just two holes to play.

But his round ended on a distinctly sour note. Spieth stalled out with a bogey at 11 and then five pars in a row to share the lead in the 17th fairway, just 77 yards from the hole. But then he shorted a wedge that rolled back off the false front, leading to bogey. And after two good swings at the par-4 18th, Spieth just missed his birdie putt, leaving just two feet of clean-up for par.

Spieth’s bid slid by the right edge, an unconvincing shove that barely caught the edge of the hole. NBC announcers pointed out that he’d looked similarly uncomfortable on a putt of a similar length on the same hole earlier in the tournament and that putt had caught the left edge and fallen in.

Mercifully, Spieth’s three-foot comebacker for bogey fell in the left side. Playing partner Dylan Frittelli slapped him on the back. And he took off with a jog up the tunnel, exiting the course as quickly as possible.

“This was shocking from Jordan Spieth. Just blocked his putt out to the right,” Golf Channel analyst Justin Leonard said after the round.

Spieth is three shots back of leader Louis Oosthuizen‘s lead and two back of Collin Morikawa in second. He’s in proper position, he’s driving the ball well and he only has to pass two players. There’s plenty left to write in the story of this Open.

Rather than speaking to the media, Spieth made his way directly from the scoring area to the putting green, where he hit putts under the watchful eyes of his caddie Michael Greller and his coach Cameron McCormick. It’s rare to see a player make it that quickly from the final green to the practice green. But it’s rare to see a player miss such a short putt on the final hole of a major, too.