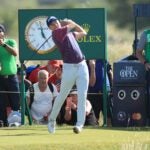 Jordan Spieth will be looking for his second Open win on Sunday at Royal St. George's.

It all comes down to this. Only 18 holes remain at the 2021 Open Championship to determine who will be the champion golfer of the year. You can find full final round tee times for Sunday at Royal St. George’s at the bottom of this post.

Notable pairings for Open Championship Round 4

At some point early in the leaders’ final rounds on Saturday at the 2021 Open, it looked like it would be Jordan Spieth‘s day, and tournament. The 2017 Open champion was making birdies all over the place, climbing from a three-shot deficit to tie for the lead at multiple points.

Meanwhile, the two major winners who began the day ahead of him, Louis Oosthuizen and Collin Morikawa, were struggling to get going early. But by round’s end, everything had changed. Oosthuizen fought off some swing problems to shoot 69 and maintain the lead, while Morikawa countered two early bogeys with four birdies to get within one of the lead.

Spieth, on the other hand, made late bogeys at 17 and 18 to drop to nine under, three behind Oosthuizen. That’s where he’ll begin the final round at Royal St. George’s, playing in the second-to-last group alongside Corey Conners beginning at 9:25 a.m. ET.

Oosthuizen and Morikawa will tee off in the final pairing at 9:35 a.m. ET.

Check out the full final round tee times for the 2021 Open championship below.

How to bet on the Open Championship — risk-free!