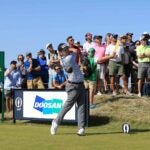 Louis Oosthuizen is contending at a major championship again. But can he close it out on Sunday?

If anyone on any continent is surprised at which players are leading this 149th Open Championship, perhaps they haven’t been paying attention.

Louis Oosthuizen has been near-flawless all week, just as he’s been the last few months. Twenty-four-year-old Collin Morikawa has been easily the best ball-striker on Tour for at least a year — pay no attention to his inexperience with the quirks and vagaries of links golf. Then there’s Jordan Spieth, who was “back” a long time ago. He’s Jordan Spieth again, and he’s firmly in the mix for the fourth major title of his career.

Oosthuizen shot a one-under 69 on Saturday at Royal St. George’s and holds the 54-hole lead at 12 under, one ahead of Morikawa, who shot 68, and three ahead of Spieth, who shot 69 after limping in with bogeys on the last two holes. That’s your top trio with 18 holes to play in the final men’s major of 2021.

It’ll be a familiar major Sunday for Oosthuizen, the soft-spoken South African who was tied for the lead at the U.S. Open just a month ago but lost to Jon Rahm by a stroke. Few players, if any, have played better major championship golf in 2021. In the first three rounds of the last three majors — the PGA, the U.S. Open and this week’s Open Championship — Oosthuizen has either led or been tied for the lead in six of the nine rounds. The only thing Oosthuizen hasn’t done? Win.

Yet he’s been knocking on the door plenty. His last four starts prior to this week: 2, T18, T2, T8. Both of those runner-up finishes have come in the last two majors, making that six 2nds in his major career. His only major title was the 2010 Open at St. Andrews.

Morikawa has a win and seven top-10s this year. He played the Scottish Open last week to get more comfortable with links golf and despite missing the cut said it was invaluable for his Open prep. Turns out he was right. He’s finished no worse than T8 in his last two major starts and seems to be well on the right trajectory this week.

And then there’s Spieth. Officially his resurgence might have happened at the Valero Texas Open in April, where he went 67-66 over the weekend to win for the first time since his memorable 2017 Open Championship victory over Matt Kuchar. He finished that final day at Royal Birkdale five under in his last five — the best closing stretch ever for a major champ — and similar Spieth-like magic will likely be required Sunday if he is to raise the jug again.

Since Spieth’s Texas Open victory, he’s made six starts and finished in the top-10 three times and no worse than T30. He’s confident and putting better and has avoided the weekend duds he put up the previous winless season.

Oosthuizen opened Saturday at 11 under, two clear of Morikawa, who joined him in the final pairing, and three ahead of Spieth, who was in the penultimate pairing with Dylan Frittelli.

Oosthuizen started steady but unspectacularly, making pars on his first six, but birdied two of his next three. Morikawa, winner of the 2020 PGA Championship, got into trouble and bogeyed two of his first five. Spieth, meanwhile, in Spieth-like fashion, made five birdies and two bogeys in his first 11. Eventually, they all made their way to the same number.

Spieth made steady pars after the 11th, while Oosthuizen made bogeys on 11 and 13. Morikawa then made up for his slow start. He made back-to-back birdies on 7 and 8 and again on 13 and 14. The latter put him into a three-way tie with Spieth and Oosthuizen. Morikawa said it took him longer to find his rhythm on Saturday.

“Sometimes, final grouping, third round, you just get a little out of sync,” Morikawa said. “I was hitting good shots. And that’s the thing, if you keep hitting quality shots you’re going to give yourself chances out here.”

The three-way tie lasted until Spieth tried to skip an approach up to the green on the par-4 17th, but it got caught on the front slope and rolled off. He failed to get up and down and made bogey. Behind him, Oosthuizen and Morikawa both hit good tee shots into the par-3 16th. Morikawa barely missed his birdie try, but Oosthuzien, from about 10 feet, drained his to take the solo lead.

Oosthuizen and Morikawa both made pars on the final two holes, but it was a disastrous finish for Spieth. He bogey on 17 came after he found the fairway off the tee. On 18, he nearly made a birdie putt but inexplicably missed his near-gimme coming back, making another bogey to fall three off the pace. After his round he immediately raced to the practice green.

On Sunday, there will be three horses out in front. But don’t sleep on the field. Two Canadians — Corey Conners (eight under) and Mackenzie Hughes (seven under) — are in the mix. Texan Scottie Scheffler (eight under) has played outstanding major golf in his young career. Reigning U.S. Open champ Jon Rahm (seven under) is lingering. So is Australian Cameron Smith (six under), who would surprise no one if he won a major at some point of his career.

Saturday’s setup was more difficult than the first two days (Rahm said the pin locations were the hardest he’s ever seen). The final round might be tougher yet.

“If there is opportunity to be more aggressive when you need to, you’ve got to do it if you want a win a championship,” Oosthuizen said. “You know, I’ll be watching the leaderboard out there tomorrow afternoon and see how it goes. Having a lead with two, three holes around this golf course, if you hit a poor tee shot, you’re in trouble.”

Sunday at the Open Championship awaits.