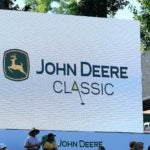 The John Deere Classic is the 11th canceled tournament on the PGA Tour schedule.

The John Deere Classic, which was scheduled to be held July 9-12, has been canceled, as first reported by Bob Harig of ESPN.

Hosted annually at TPC Deere Run in Silvis, Ill., the tournament was scheduled to be the fifth PGA Tour event back after the scheduled return from the three-month hiatus, and the first to allow fans. According to Adam Schupak of Golfweek, sources indicated that the title sponsor of the event didn’t want to risk having fans at the event in order to minimize the risk of a coronavirus outbreak.

Although many states in the country are in the process of reopening, Illinois still currently has a stay-at-home order in effect. The order is set to expire on May 29.

John Deere Classic Tournament Director Clair Peterson released a statement through PGATour.com: “While we considered several alternatives for the Classic, this was the choice that made the most sense for our guests, the players and the Quad City community at large.”

The PGA Tour noted it is looking into contingency plans to replace the event on the schedule, with a one-off replacement tournament. According to Harig, TPC Sawgrass is being considered as a venue. The Tour has not played an event since the cancelation of the Players Championship after one round in early March.

With the rumored cancelation, the John Deere Classic would be the 11th event on the original schedule to be axed as a result of the coronavirus pandemic.

The Tour is scheduled to resume June 11 at the Charles Schwab Challenge in Fort Worth, Texas.